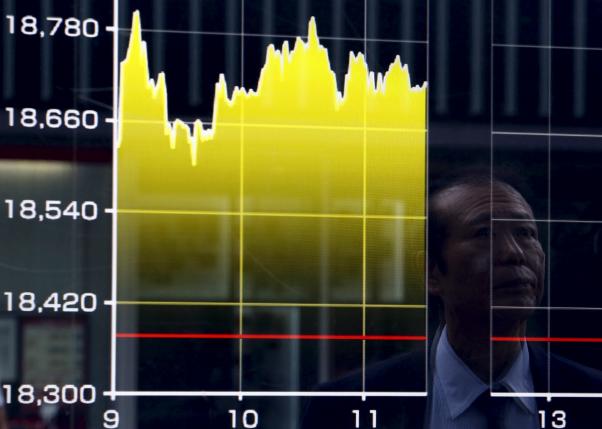 TOKYO - Asian stocks rose across the board on Tuesday following a surge on Wall Street overnight as investors clawed back losses that came on the back of last week's Paris attacks. Meanwhile, expectations for a December rate hike by the Federal Reserve also kept the dollar on a bullish footing. Spreadbetters saw stronger risk appetite retained in Europe, forecasting a higher open for FTSE, Germany's DAX and France's CAC. MSCI's broadest index of Asia-Pacific shares outside Japan rose 1.7 percent, bouncing from a 6-week low struck the previous day on risk aversion triggered by the assault on the French capital. South Korea's Kospi was up 1.4 percent, Australian shares gained 1.8 percent and Shanghai stocks climbed 1.4 percent. Japan's Nikkei added 1.6 percent, brushing a 3-month peak. "Investors think that the attacks in Paris would have little impact on the global economy in the long-term," said Hikaru Sato, senior technical analyst at Daiwa Securities in Tokyo. "Depending on new developments, the market could get affected in the future, but right now, market consensus is that the attacks have a limited impact on the stock market." Asia took early leads from Wall Street, which surged on Monday as investors decided Friday's attacks in Paris would have little long-term impact on the US economy and corporate earnings. The Dow rose 1.4 percent and the S&P 500 surged 1.5 percent. European equities had also held firm on Monday, with the pan-European FTSEurofirst 300 index edging up 0.16 percent and France's CAC dipping only 0.12 percent. "In light of all the tragedy in France, it is refreshing to see that the terrorists did not successfully terrorise the financial markets...and even though investors sold the EUR/USD, the decline could have been a lot steeper. "In fact we did not see any unusually large moves in currencies," wrote Kathy Lien, managing director of FX Strategy for BK Asset Management. The dollar rose to a 1-week high of 123.405 yen , a safe-haven currency usually sought in times of geopolitical tension. The greenback also rose to an 8-month high against the Swiss franc, another haven. The euro dipped to $1.0656, a 7-month trough. Crude extended gains after the Paris attacks raised geopolitical tensions that were seen to threaten global oil supply. Brent crude nudged up 0.2 percent to $44.64 a barrel, adding to overnight gains of 2.2 percent. Spot gold was little changed at $1,081.77 an ounce. The precious metal pared gains overnight as an initial flow of flight-to-safety buying after the Paris attacks petered out. Investor focus has returned to a potential rate hike by the Fed in December. Higher interest rates would diminish the allure of the non-interest-paying gold. Industrial metals did not fare as well. Three-month copper on the London Metal Exchange (LME) plunged to 6-year lows, dogged by worries about demand from top consumer China. LME zinc also wobbled near 6-year troughs. In addition to concerns about demand from China, the dollar's appreciation has buffeted industrial metals as a stronger US currency makes greenback-denominated commodities more expensive for buyers. -Reuters