Asian shares edge up, euro under pressure as ECB looms 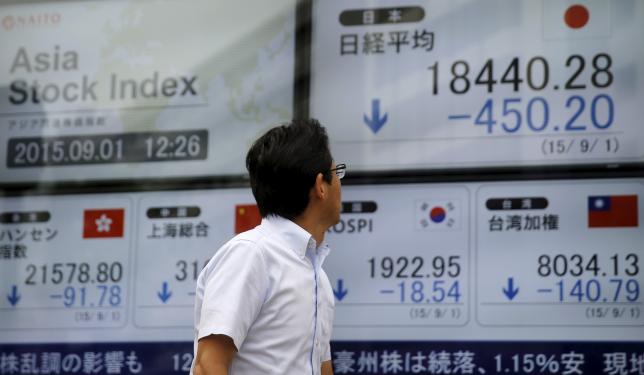 Asian shares edge up, euro under pressure as ECB looms

SINGAPORE/TOKYO - Asian shares advanced on Thursday, while the euro remained under pressure on growing bets that the European Central Bank will roll out more stimulus soon even as the US Federal Reserve looks set to raise interest rates. European markets are set to open marginally higher, with financial spreadbetters expecting Britain's FTSE 100 and France's CAC40 to gain about 0.2 percent each, and Germany's DAX to start the day up 0.1 percent. MSCI's broadest index of Asia-Pacific shares outside Japan rose 0.5 percent, after Wall Street put in a nearly flat performance ahead of the US Thanksgiving holiday. US markets will be closed on Thursday and most of Friday afternoon. Japan's Nikkei ended the day up 0.5 percent. The Shanghai Composite index slipped 0.2 percent, while the Hang Seng climbed 0.6 percent. Taiwan and South Korean shares added more than 1 percent. The euro recovered to $1.0623 following a drop to a more than seven-month low of $1.0565 overnight, after euro zone central bank officials told Reuters that they are considering options such as staggering charges on banks hoarding cash and buying more debt ahead of next week's ECB meeting. The common currency also touched a seven-month low against the yen overnight, falling to 129.77 before edging back to 130.20. "The short positioning on the euro is a bit extended here in part because everyone expects the ECB to take some measures next week to ease monetary policy in the euro area further," said Thierry Wizman, global interest rates and currencies strategist at Macquarie Limited in New York. The euro's renewed weakness and a spate of US economic data that reinforced views the Federal Reserve will raise interest rates next month for the first time in nearly a decade boosted the dollar. The dollar index, which tracks the greenback against a basket of six other major currencies, scaled an 8-1/2-month high of 100.170 overnight. It last stood at 99.741. Against the yen, the dollar slipped 0.1 percent to 122.56. Better-than-forecast US durable goods data and jobless claims offset somewhat weaker-than-expected readings on consumer inflation and sentiment, and gave investors no reason to believe the Fed would not raise rates. "We see very little to upset or upend the December rate hike," said Dan Heckman, senior fixed income strategist at US Bank Wealth Management in Kansas City, Missouri. "Cumulatively, we think there's no reason for the Fed not to act," he said. The dollar's strength kept gold close to its lowest in nearly six years. Spot gold held steady at $1,072.80 an ounce after dropping 0.4 percent on Wednesday. US crude oil futures edged up in light trading, after erasing early losses on Wednesday on data showing a smaller-than-expected supply build in the United States and a drop in the number of US rigs actively drilling for oil. [O/R] US crude advanced about 0.3 percent to $43.18 a barrel. Brent was little changed at to $46.16. -Reuters