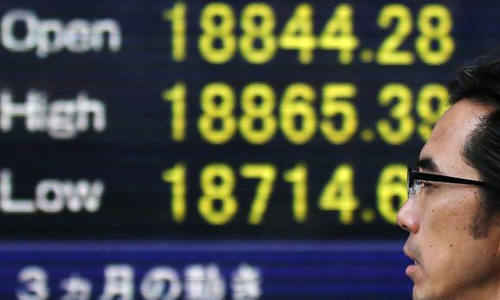 TOKYO (Reuters) - Most Asian stock markets edged higher on Tuesday, bolstered by another record day on Wall Street, while a resurgent yen helped knock the US dollar index off an 11-year high. The Australian dollar jumped after the Reserve Bank of Australia held policy steady, confounding investors who had bet it would deliver a back-to-back interest rate cut instead of holding off for a few months to gauge how the economy digested last month's cut. "They're clearly signaling that if we continue to see low levels of confidence they will go again. We're still comfortable with our view that they'll cut again in the next couple of months," said NAB senior economist Spiros Papadopulos. MSCI's broadest index of Asia-Pacific shares outside Japan .MIAPJ0000PUS added about 0.1 percent, while Japan's Nikkei stock average .N225 erased early gains and slipped about 0.3 percent after the yen rebounded from a three-week low against the greenback touched earlier in the session. On Wall Street on Monday, the Dow Jones industrial average .DJI and the S&P 500 .SPX both posted fresh record closing highs, while the Nasdaq Composite .IXIC broke 5,000 for the first time in 15 years. The dollar index .DXY climbed as far as 95.516 earlier in the session, its highest since September 2003, but was last down about 0.2 percent on the day. The dollar skidded about 0.4 percent against the yen to 119.69 JPY=, after touching a fresh three-week high of 120.27 earlier on Tuesday. The yen's ascent came after an adviser to Japan's government reportedly said the yen's correction from its past excessive strength is likely complete. The euro gained about 0.1 percent on the day to $1.1190 EUR=. The dollar's rise overnight showed the extent to which some investors have begun positioning for the possibility of a near-term rate hike, as it came in spite of a batch of downbeat US data, including another fall in US consumer spending and slower factory activity. "The market's relentless appetite for US dollars is impressive considering that the latest economic reports hardens our view that the Federal Reserve will raise interest rates in September and not in June," Kathy Lien, managing director at BK Asset Management, said in a note to clients. The Aussie dollar AUD=D4 was last up 0.8 percent at $0.7824 after going as low as $0.7751 earlier in the session amid expectations that the RBA would cut rates. The main data focus for the market this week will be Friday's US jobs report for February. Employers are expected to have added 240,000 jobs in the month, according to the median estimate of 100 economists polled by Reuters. A strong reading is likely to heighten expectations that the Fed will opt to hike interest rates by the middle of this year. A sharp selloff in Brent crude overnight kept some investors cautious. Brent LCOc1 was up 0.7 percent on the day at $60.34 a barrel after plunging as much as 5 percent in the previous session, after Iran said a deal on its nuclear program could be reached this week if the West lifts sanctions. Such a move would likely boost the country's oil exports and increase global supply. Gold dropped for a second day on growing expectations for a US rate hike. Spot gold XAU= edged down about 0.1 percent to $1,207.18 after touching a session low of $1,194.90 an ounce.