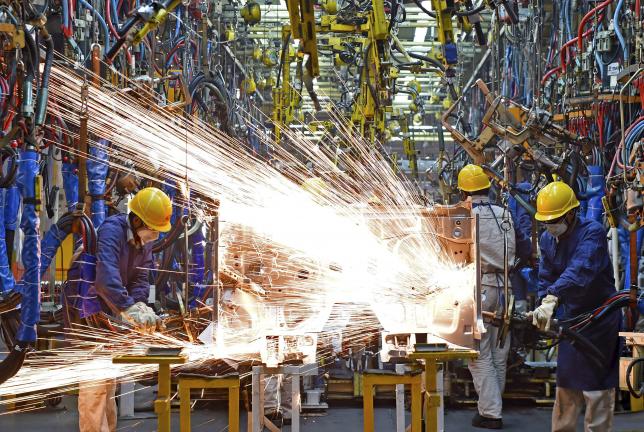 JAKARTA - Factory activity deteriorated across much of Asia in November, with China sinking to a three-year low, as policymakers braced for an expected rise in US interest rates later this month that could jolt the global economy.

Business surveys showed few signs of vigour across the trade-reliant region apart from Japan, with sluggish demand at home and abroad forcing manufacturers from China to Indonesia to throttle back production, cut selling prices and shed more jobs.

"A Fed rate hike would represent a further pinch. With growth having been highly credit dependent in recent years, higher interest rates in the US will inevitable add to the region's challenges."

Global policymakers and investors are bracing themselves for the first hike in US rates since 2006, which most analysts see coming at the Federal Reserve's Dec. 15-16 meeting.

After many months of speculation, a rate increase might remove some of the uncertainty that has caused large swings in emerging-market currencies and stock markets. But Asian exporters will be on edge, hoping rising US rates at a time of global weakness will not backfire and stunt demand in one of their biggest markets.

"Industrialised Asia is still feeling the hurt from reduced external demand," said Barclay's economist Wai Ho Leong. "The US is providing some year-end festive lift but these economies are saddled with high inventories which take time to clear."

Similar business surveys will be released later in the day for Europe and the United States. The European Central Bank has all but committed itself to announcing more stimulus at a meeting on Thursday, but that may not be enough to lift Asia's sagging exports.

On the whole, there was little in Tuesday's Asia survey numbers to cheer about. Business conditions did not deteriorate as badly in some countries as in past months, but there were scant signs of any recovery.

China's official Purchasing Managers' Index fell for a fourth month in a row in November, hitting its lowest level since August 2012, as new export orders dropped for the 14th month.

A private survey, the Caixin/Markit China PMI, which focuses on small and mid-sized companies, edged up to its highest reading since June, but still pointed to a ninth month of contraction.

However, a pickup in services activity in a similar official survey offered some hope that the sector would offset persistent weakness in "old economy" growth drivers such as manufacturing.

Many of China's major trading partners and global suppliers of goods from iron ore to excavators had hoped for some signs of improvement in the economy in the fourth quarter, but Nomura economists said the weak PMI findings suggest November official data in coming weeks will largely remain on the soft side.

Facing what could be its slowest pace of economic expansion in a quarter of a century, China has slashed interest rates six times in the past year as part of sweeping stimulus efforts, and more easing is expected next year.

While the moves may have reduced the risk of a so-called hard landing for the economy, so far they have yet to show signs of re-energising demand.

"With soft growth momentum and deflation pressures creeping up, we expect the authorities to further ease monetary policy and continue to implement an expansionary fiscal policy," said economists Li-Gang Liu and Louis Lam at ANZ bank.

Meanwhile, in the first indication of how Asian trade performed in November, South Korea's exports fell by 4.7 percent from a year earlier, the 11th month of contraction.

There was much better news out of Japan, where manufacturing firms, possibly aided by a weak yen, may be producing enough to lift the world's third-largest economy out of recession.

Manufacturing production expanded by its fastest pace in 20 months in November as new orders picked up, according to Markit/Nikkei Japan Final Manufacturing Purchasing Managers Index.

Prime Minister Shinzo Abe is piling pressure on companies to increase investment to spur economic growth, as his "Abenomics" recipe of monetary stimulus, public spending and reform continues to struggle for traction.

There were signs that firms are loosening the purse strings, with corporate spending on plant and equipment up by 11.2 percent from a year earlier in July-September, the fastest pace since 2007, government data showed on Tuesday.

With financial markets on edge ahead of any fallout from the Fed's decision this month, Asian central banks are for the most part staying pat for now while hinting there is room to ease policy further if conditions do not improve next year.

Australia's Reserve Bank held rates on Tuesday in a widely expected move after Governor Glenn Stevens told markets to "chill out" over the Christmas holidays, meaning that rates will now remain where they are at least until February.

In India, where the economy is now growing faster than China's, after expanding by 7.4 percent year on year in the third quarter, its central bank also held rates on Tuesday, as expected, while leaving the door open for more easing if needed.

When the Fed does raise US rates, there may be pressure on some Asian central banks to follow. But economists said many others will not have to tighten policy.

"In Singapore and Hong Kong, where local rates are closely linked to the Fed funds rate, US tightening will be a headwind, but there is no compelling reason why other central banks in the region should follow the Fed's lead," said Dan Martin at Capital Economics.

"And the Fed will only be hiking rates if the US economy is doing well, which will be good for Asian exports," he added. -Reuters