Astronauts breeze through spacewalk to rig station for US space taxis 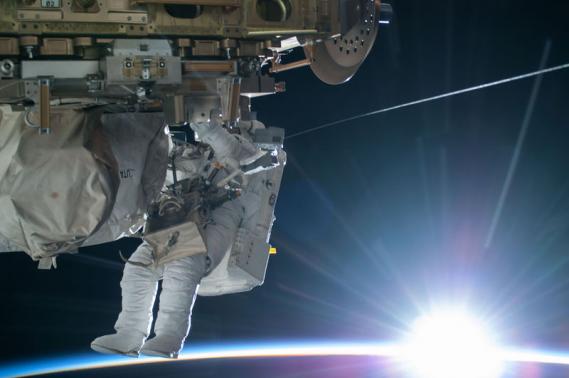 Astronauts breeze through spacewalk to rig station for US space taxis

CAPE CANAVERAL, FLORIDA (Reuters) - Two US astronauts whipped through a third spacewalk outside the International Space Station on Sunday to rig parking spots for new US space taxis. Station commander Barry "Butch" Wilmore and flight engineer Terry Virts expected to spend about seven hours installing antennas, cables and navigation aides on the station's exterior truss. Instead, the astronauts, who were making their third spacewalk in eight days, were back inside the space station in 5.5 hours. The purpose of the outings was to prepare berthing slips for spaceships being developed by Boeing and Space Exploration Technologies, or SpaceX. Wilmore and Virts floated outside the Quest airlock shortly after 7 a.m. EST/1200 GMT, a NASA Television broadcast showed. Their job was to install more than 400 feet (122 meters) of cables, a pair of antennas and reflectors that the new spaceships will use to navigate toward and dock with the station, a $100 billion laboratory that flies about 260 miles (418 km) above Earth. After the spacewalk, Virts reported that a small amount of water had seeped into his helmet, a situation that also occurred after a spacewalk last week. "It's no issue to crew safety," mission commentator Daniel Huot said. In July 2013, Italian astronaut Luca Parmitano nearly drowned when water began leaking into his helmet. NASA immediately aborted the spacewalk and suspended spacewalks while engineers figured out the cause of the problem. The incident with the suit Virts was wearing is unrelated, NASA said. Sunday's outing followed two spacewalks last week to rig power and data cables for a pair of docking port adapters that are due to arrive later this year. One adapter will be installed at the berthing slip once used by NASA's space shuttles, which were retired in 2011. The second docking system will be located at an adjacent hatch on the Harmony connecting node. Since the shuttles' retirement, the United States has been dependent on Russia to fly crew to and from the station, a joint project of 15 nations. NASA aims to break Russia's monopoly before the end of 2017 by buying rides from Boeing and SpaceX.