At least 11 dead in attack on Tunisia military bus 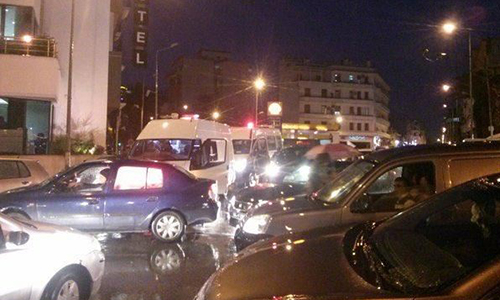 At least 11 dead in attack on Tunisia military bus

TUNIS – At least 11 people were killed on Tuesday after an explosion hit a bus carrying Tunisian presidential guards along a major street in the centre of the capital Tunis. Security and presidential sources said the explosion was an attack, adding it was not immediately clear whether it was a bomb or an explosive fired at the bus as it travelled along Mohamed V Avenue. Ambulances rushed from the scene and security forces quickly sealed off the area. Tunisia has suffered two major attacks this year targeting its tourism industry. A gunman killed 38 foreigners at a beach hotel in June and in March, gunmen killed 21 tourists in an attack at the Bardo Museum in Tunis. Islamic State claimed both attacks. The army has also been fighting against another Islamist militant group in the mountains near the Algerian border. Militants have hit checkpoints and patrols in rural areas in the past. –Reuters