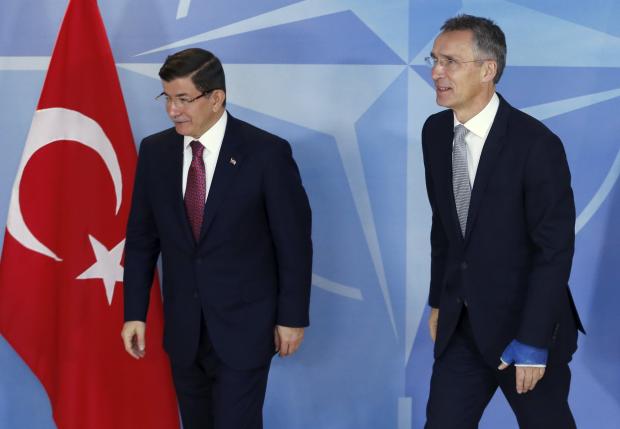 BRUSSELS – Turkey's prime minister dismissed on Monday any suggestion Ankara should apologize for downing a Russian warplane in its airspace last week, after winning strong NATO support for the right to defend itself.

Six days after NATO member Turkey shot down the Russian fighter jet in the first known incident of its kind since the Cold War, calls for calm have gone largely unheeded as Ankara refuses to back down and Russia responds with sanctions.

"No country should ask us to apologize," Prime Minister Ahmet Davutoglu told reporters following a meeting with NATO's secretary general at the alliance headquarters in Brussels.

"The protection of our land borders, our airspace, is not only a right, it is a duty," he said. "We apologize for committing mistakes, not for doing our duty."

Russian President Vladimir Putin said on Nov. 26 he is waiting for an apology after Turkey's air force shot down the Su-24 fighter jet along the Turkey-Syria border.

Following the meeting with NATO chief Jens Stoltenberg in which he won the alliance's firm support for the right to self-defense, Davutoglu also warned that such incidents continued to be a risk as long as Russia and the U.S-led coalition bombing Islamic State in Syria worked separately.

"If there are two coalitions functioning in the same airspace against ISIL, these types of incidents will be difficult to prevent," Davutoglu said, referring to Islamic State militants.

Seeking to calm the situation, Stoltenberg called for new emergency procedures to be agreed with Moscow to avoid triggering conflict by accident, whether that was during bombing raids in Syria or war games conducted by Russia and NATO.

NATO foreign ministers are expected to discuss such procedures at a meeting in Brussels on Tuesday and Wednesday as Russia's military activities from the Baltics to the Middle East come right up to - and sometimes stray over - NATO borders.

"It has to be modernized because there are several loopholes," Stoltenberg said.

Israeli Defence Minister Moshe Yaalon on Sunday underscored the coordination with Russia that allowed Israel to avoid flare-ups after a Russian warplane operating in Syria strayed into Israeli-controlled airspace. It turned back after the two countries conferred.

Moscow's surprise intervention in the four-year-old Syrian civil war in September wrong-footed the West and put Turkey, which shares a long border with Syria, directly at odds with Russian support for the Assad regime there.

The downing of the Russian warplane has wrecked both Turkish-Russian relations and the French-led diplomatic effort to bring Moscow closer into the fold of nations seeking to destroy Islamic State through military action in Syria.

While Russia says it is also targeting Islamic State, most of its air strikes have been against other Assad opponents, including groups actively supported by Turkey.

"Their bombing is taking place in areas where ISIL is not present at all," Stoltenberg said. –Reuters