Attitude of JIT is not neutral, says Saad Rafiq


LAHORE (92 News) – Minister for Railways Khawaja Saad Rafiq has on Sunday said that the attitude of the Joint Investigation Team (JIT), formed to probe Prime Minister Nawaz Sharif and his family in Panama Leaks case is not neutral and based on revenge.

Addressing an Eid Milan Party in Lahore on Sunday, he said that dragging us out would be like expelling the politics.

The minister said that negative elements are having difficulties to digest the process of fast paced country’s development and trying to hamper the process of progress.

“Under leadership of Prime Minister Nawaz Sharif the dream of bright and secured Pakistan has been realized,” he said.

Saad Rafiq said that the Pakistan Tehreek-e-Insaf (PTI) chairman is running from his own accountability, adding that Imran Khan is involved in attacking state institutions.

He said that Imran Khan is hesitate to present himself before Election Commission of Pakistan (ECP) and avoiding to provide detail about foreign funding. “Imran Khan should tell about his money trail instead of leveling baseless allegations against others.”

The PML-N leader said that the entire world is acknowledging economic achievements of Pakistan as a result of prudent policies of incumbent government. 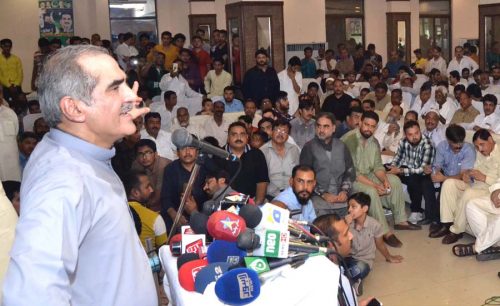