Australia go with Hazlewood over Siddle for first test 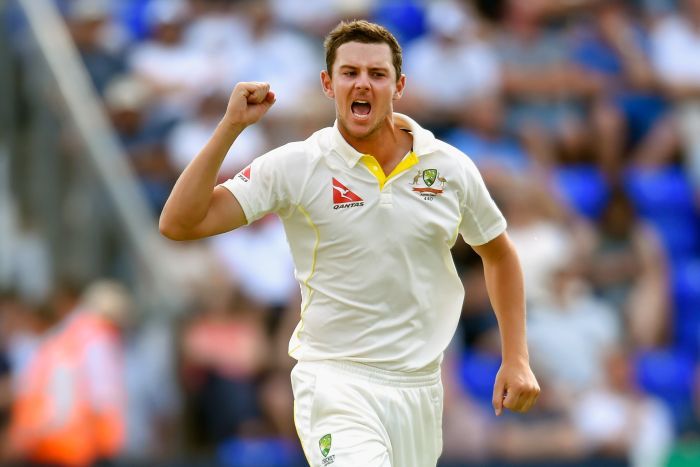 Australia go with Hazlewood over Siddle for first test

SYDNEY - Josh Hazlewood will be Australia's third pace bowler in this week's first test against New Zealand after Peter Siddle was named 12th man on Wednesday. Both seamers were in the squad for the match, which starts in Brisbane on Thursday, but it is Hazlewood who will join Mitchell Johnson and Mitchell Starc in the pace attack at the Gabba. Australia captain Steve Smith told reporters in Brisbane on Wednesday that Siddle would be frustrated not to be included. "It's obviously disappointing for him," said Smith. "He bowled extremely well in the last test match at the Oval but that's the team we've gone with." Siddle, 30, had fought his way back into the side during the Ashes series in England last year and his match haul of 6-67 helped Australia to a thumping innings and 46-run consolation victory in the fifth test. Hazlewood, six years Siddle's junior, took 16 wickets in four tests against England last year but, low on confidence and struggling with the intense pressure of the Ashes campaign, was rested for the fifth test. With more height and bounce to his bowling than Siddle can offer, Hazlewood's five-wicket haul on debut against India at the Gabba last year also clearly played a part in his selection ahead of Siddle. "Josh Hazlewood had a lot of success out here last year against India," added Smith. Smith had expected to lead Australia into a series for the first time in Bangladesh last month only for the trip to be postponed indefinitely because of security concerns. The 26-year-old, who took over as full-time captain after Michael Clarke retired in the wake of the Ashes defeat, confirmed he would drop down a spot to play at number four in the batting order to make way for Usman Khawaja at first drop. Australia will be looking for some big performances at the heart of the new-look batting order from Smith, who averages 56.27 with the bat after a stellar couple of years. "As a leader, my philosophy is to lead from the front," said Smith, who scored centuries against India in all three matches as stand-in skipper for the injured Clarke last season. "That was what I tried to do last year when I got the chance to captain. I'd like some more success like that." His first task as permanent skipper is to defend Australia's long unbeaten record in Brisbane, which stretches back to a loss to the West Indies in 1988, against a confident New Zealand team. Smith made it clear that despite extending an invitation to the New Zealanders to share a drink after the match, Australia would not be adopting Black Caps skipper Brendon McCullum's approach to the game. "They're playing that nice-guy act again but we're going to continue playing that hard and aggressive cricket," Smith said. Team: David Warner, Joe Burns, Usman Khawaja, Steve Smith (captain), Adam Voges, Mitchell Marsh, Peter Nevill (wicketkeeper), Mitchell Johnson, Mitchell Starc, Josh Hazelwood, Nathan Lyon, Peter Siddle. -Reuters