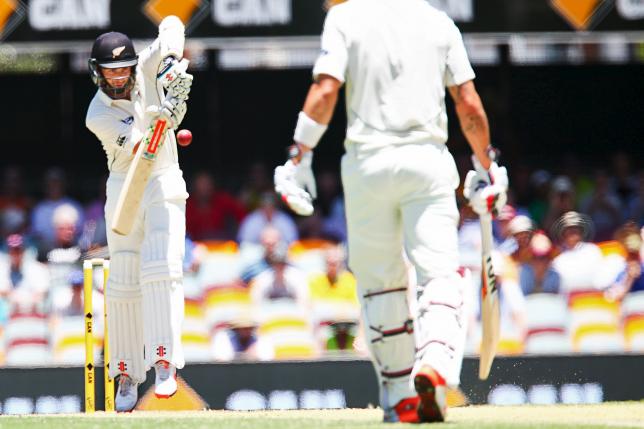 BRISBANE – Australia finished the third day of the first Test against New Zealand in a dominant position on 264 for four with a lead of 503 runs on Saturday. Burns, playing on his home ground in his third Test, smashed two sixes in three balls to reach the milestone just before rain halted play for 50 minutes in the final session. Warner, who scored 163 in the first innings, joined him with a century of his own after the weather delay -- the third time he has made hundreds in both innings of a Test. The opening partnership was broken with 237 runs on the board when Warner departed for 116 attempting a switch-hit slog sweep and Burns followed him soon afterwards for 129. Captain Steve Smith (1) and Mitchell Marsh (2) were also dismissed as Australia chased runs, leaving Usman Khawaja (9) and Adam Voges, who had yet to score, to resume on day four. Warner and Burns had combined to contribute 161 of Australia's 556-4 declared in the first innings and it was the first time openers had put together partnerships in excess of 150 in both innings of a Test. "Credit to the openers for putting the runs on the board," spinner Nathan Lyon told Channel Nine. "With the weather hanging around, you never know what's going to happen and it's given Steve Smith the option of declaring whenever he wants to." New Zealand, who had resumed on 157-5, were earlier dismissed for 317 after a brilliantly defiant 140 from Kane Williamson but Smith decided not to enforce the follow-on despite the 239-run deficit. Without injured paceman Tim Southee, New Zealand looked toothless in the field, and Burns and Warner took full advantage, both signalling their intent by smashing Trent Boult to the boundary in the opening over. Warner got his half century first but then found himself in the unusual position of watching his partner exceed his scoring rate. On 88, Burns marched down the wicket to smash spinner Mark Craig for six high over the long-off boundary and repeated the feat two balls later to secure the century in 102 balls. Left-arm paceman Mitchell Starc played his part in another good day for Australia by claiming the final two New Zealand wickets to finish with figures of 4-57. He brought about the beginning of the end with his fourth delivery with the new ball to take out Southee's off stump before an inswinger finally induced Williamson into an inside edge. Williamson had kept his cool in the most trying of circumstances, scoring his 11th Test hundred and hitting 24 fours all around the ground to frustrate Australia until halfway through the second session. –Reuters