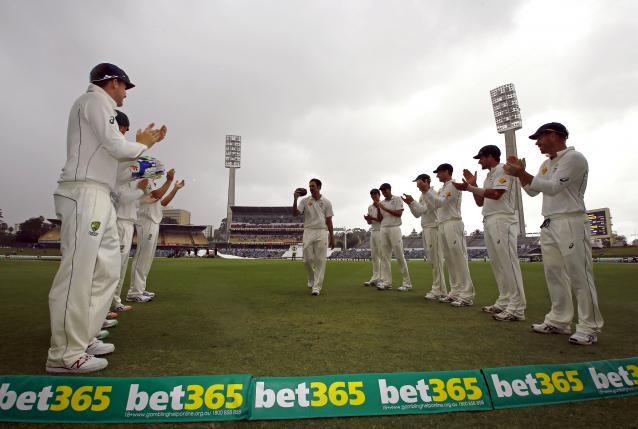 PERTH - Australia's Mitchell Johnson, who was the most devastating fast bowler of his era when in form, will retire from all international cricket at the conclusion of the second test against New Zealand later on Tuesday. The 34-year-old left-armer, who was named International Cricket Council (ICC) Player of the Year in 2009 and 2014, is fourth on the all-time list of test wicket-takers for Australia with 311 at an average of 28.52. His fortunes over his test career mirrored those of his country, in his pomp from his debut in 2007 to 2009 with a return to form in late 2013. In between there was a long fallow period when he became a figure of fun, particularly among the fans of England. Johnson had the last laugh, though, when he fired Australia to a 5-0 Ashes sweep in 2013-14 as well as helping the hosts to a fifth World Cup triumph in the 50-over format earlier this year. "I feel now is the best time to say goodbye," Johnson said in a Cricket Australia news release on Tuesday. "I have been lucky enough to have had a wonderful career and enjoyed every moment of playing for my country. It's been an incredible ride. "My career has certainly had its up and downs but I can honestly say I have given it my all and am proud of everything I have achieved. To win an Ashes Series and a World Cup is something I will treasure forever." Born and raised in Queensland, Johnson ended up playing his state cricket for Western Australia and so it is appropriate he will play his 73rd and final test match at the WACA. Returns of 3-105 and 1-58 in the first test against New Zealand in Brisbane last week prompted Johnson to say he was thinking about retirement every day. Figures of 1-157 in New Zealand's first innings in the second test, the most expensive by an Australian bowler in a test at the WACA, sealed the deal and he made his announcement ahead of day five of the match. "I've given the decision a lot of thought," he said. "Beyond this match, I'm just not sure that I can continue competing consistently at the level required to wear the Baggy Green. "I would certainly like to thank the people of Australia, and all those around the world, who have supported me. The encouragement I have received has been extremely humbling." The one wicket he took in New Zealand's first innings was his 311th, putting him behind only Shane Warne, Glenn McGrath and Dennis Lillee in the list of Australian test wicket-takers. He also took 239 wickets in 153 one-day internationals at the cost of 25.26 apiece and 38 in 30 Twenty20 internationals. His batting was almost good enough at times to warrant the all-rounder tag and he scored 2,036 runs in tests at an average of 22.13 with a high score of 123 not out against South Africa in Cape Town in his annus mirabilis, 2009. "I'm not surprised he's retired," former Australia captain Mark Taylor, now a pundit for Channel Nine, said. "When you are a genuine fast bowler, you need intimidation, pace and bounce. When you lose that edge, as he has over the last six months or so, you go downhill quickly." -Reuters