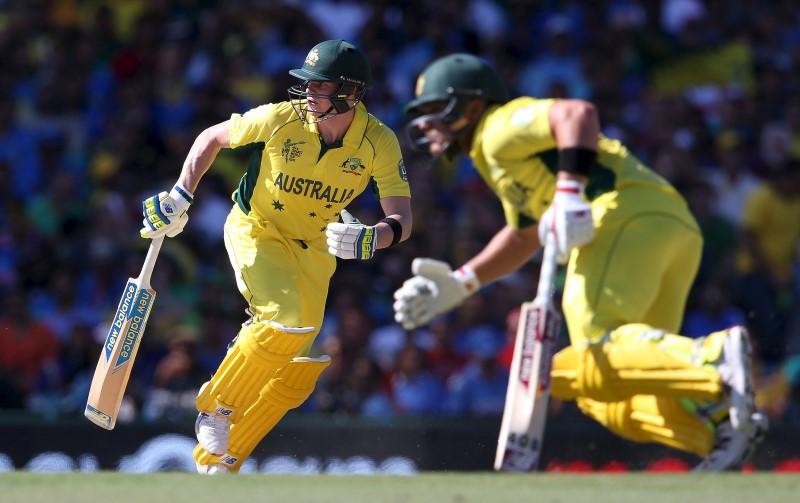 SYDNEY - Australia captain Michael Clarke won the toss and chose to bat first in their World Cup semi-final against India at Sydney Cricket Ground (SCG) on Thursday. Both sides were unchanged for the contest to decide who meets the other co-hosts New Zealand in Sunday's final at Melbourne Cricket Ground. The match pits four-times champions Australia, the top-ranked team in one-day cricket, against title holders India, the sport's dominant financial power. The ground was bathed in sunshine under blue skies at the toss and early indications are, as has been predicted, Indian fans will outnumber locals in the capacity crowd. Australia were unchanged for the first time in the tournament after deciding to retain a third specialist pace bowler in Josh Hazlewood, who took 4-35 in the six-wicket quarter-final victory over Pakistan. Despite the SCG's reputation for offering some turn for the slow bowlers, the Australian selectors decided against bringing in specialist spinner Xavier Doherty. "I think the wicket looks great. I think it will be pretty good for both innings, runs on the board is the reason why we have gone for batting first," said Clarke, adding that Hazlewood's selection was the right one. "I thought he was exceptional, I think he grabbed his opportunity with both hands and the selectors feel this is the right XI for these conditions and I'm confident, if we play our best cricket, we can have success here today" India have remained unchanged throughout the tournament except when forced by injury to replace paceman Mohammed Shami and they retained the same team that beat Bangladesh by 109 runs in the quarter-finals. Skipper Mahendra Singh Dhoni said India would also have batted first but he was not that concerned to lose the toss. "Toss is something beyond our control so you have to accept it," he said. "Yes we would have also batted first. Everyone is fit so that gives us the ability of playing the same squad." When asked about the in-form Rohit Sharma, Dhoni said: "I think each and everyone, in a game like this, has to be at your best. If you can get a good start make sure you score big. "It is something that we always emphasise, partnership is more important than individual performance so that has been the key for us throughout this world cup." Australia - Aaron Finch, David Warner, Steven Smith, Michael Clarke (captain), Shane Watson, Glenn Maxwell, James Faulkner, Brad Haddin, Mitchell Johnson, Mitchell Starc, Josh Hazlewood India - Rohit Sharma, Shikhar Dhawan, Virat Kohli, Ajinkya Rahane, Suresh Raina, Mahendra Singh Dhoni (captain), Ravindra Jadeja, Ravi Ashwin, Mohammed Shami, Mohit Sharma, Umesh Yadav. - Reuters