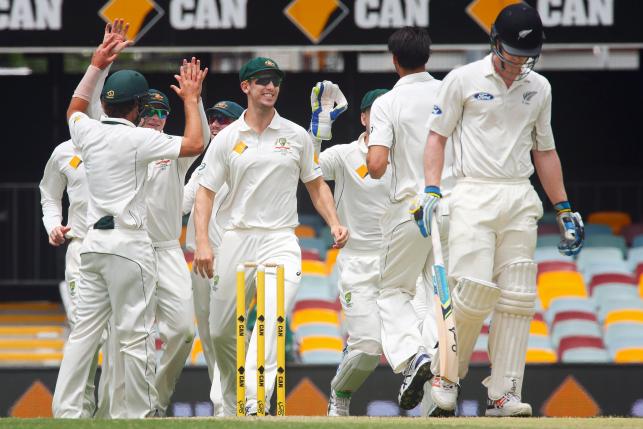 BRISBANE - Australia were held up by Brendon McCullum but dismissed New Zealand for 295 before lunch on the final day of the first test on Monday to win by 208 runs and take a 1-0 lead in the three-match series. The hosts had dominated the match since their new-look top order racked up 389-2 on the opening day and never looked like losing a first test at the Gabba since 1988. New Zealand captain McCullum fought a thrilling rearguard with a run-a-ball 80 but once he was controversially dismissed the writing was on the wall for the tourists. Australia made 556-4 declared in their first innings and declared again on 264-4 in their second, limiting New Zealand to 317 in their first knock. "It's nice to start the summer off on a high," said Australia skipper Steve Smith. "I think the boys did a great job from day one ... that really set us up for the test match. To be one-nil up in a three-match series is pretty crucial." Opener David Warner was named Man of the Match for his innings of 163 and 116, the best of several fine batting displays from the hosts that formed the bedrock of the victory. Although New Zealand never looked like reaching their victory target of 504, the prospect of more wet weather and McCullum's exploits had kept alive their hopes of batting out the day for a draw. Resuming on 142 for three, McCullum took the game to Australia and scored a half century off 44 balls, with seven fours and a single straight six taking him to the milestone. The aggressive nature of his innings meant the righthander rode his luck at times but while he was firing at the crease, there was still a chance. Ross Taylor (26) and the injured James Neesham (3) were dismissed at the other end but it was the departure of BJ Watling for 14 that precipitated McCullum's demise. Nathan Lyon's lbw appeal was confirmed by technology but the use of New Zealand's final review to check the decision cost McCullum dear in the following over. Mitchell Marsh forced the batsman onto the back foot with a low delivery and although umpire Nigel Llong raised his finger in response to the appeal for caught behind, television replays suggested there had been no contact with McCullum's bat. McCullum called the decision "disappointing" but said it should not detract from a deserved victory for the hosts. "I thought Australia were outstanding," he said. "Right from ball one, they put us under a lot of pressure (and) we were always chasing the game. "We'll take our medicine, we'll cop it sweet and move onto Perth." The second test begins in Perth on Friday and the series concludes with the inaugural day/night test in Adelaide. After McCullum's dismissal, Doug Bracewell was dismissed lbw for a golden duck and although all-rounder Marsh (2-25) failed to secure the hat-trick, Tim Southee (5) did not last long. Trent Boult (15) was the final batsman to fall, giving quick Mitchell Starc figures of 2-69. Off spinner Lyon finished with 3-63. Neesham batted despite a back injury that New Zealand said would rule him out of the rest of the tour, a second blow after paceman Southee's irritated disc prevented him from bowling in the second innings. The all-rounder's wicket gave quick Mitchell Johnson his 310th test victim to bring him level with Brett Lee as Australia's fourth most prolific wicket-taker in the five-day game. -Reuters   SCOREBOARD