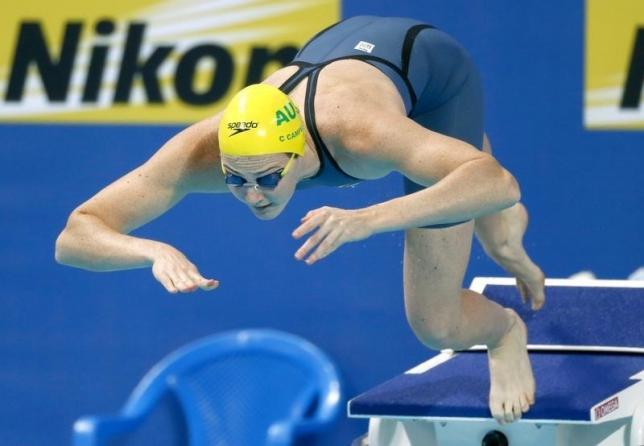 SYDNEY – Cate Campbell set a world record for the 100 metres freestyle at the Australian short-course swimming championships on Saturday in a race where she eventually finished last. A specialist sprinter, Campbell broke the 100m record during the final of the 200m freestyle when she set off at full speed and reached the halfway point of the eight-lap race in 50.91 seconds. With the record safely in the bag, the 23-year-old then slowed down and coasted to the finish, taking almost another 90 seconds to complete the last four laps and allowing all her rivals to overtake her. "It was pretty unique to get a world record and then finish dead last in your race," Campbell told reporters at Sydney's Olympic pool. "Not many people can claim that but I've always been a trailblazer, so I'll take it." Campbell's split time slashed a tenth of a second off the previous record of 51.01, set by Australian Libby Trickett in 2009. It was also the second short-course world record set in as many days at the Australian championships after Mitch Larkin broke the men's 200m backstroke mark on Friday. Already an Olympic and world gold medallist, Campbell is one of the spearheads of Australia's star-studded female swim team expected to dominated the sprinting events at next year's Rio Olympics. Her biggest rival is her younger sister Bronte who won the 50m-100m freestyle double at this year's world championships in Russia. Cate Campbell had set her sights on breaking the 100m world record at the Australian championships but came up just short of the mark in Thursday's final so her coach told her to make another attempt during the 200m. "In an ideal world, the 100m would've been on the last day but it wasn't," she said. "It was on the first day. So this was a good compromise." –Reuters