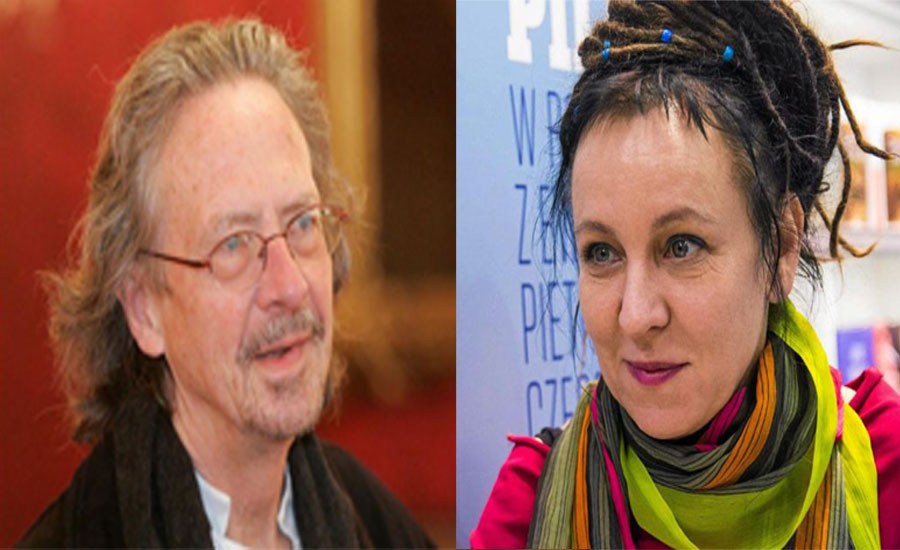 STOCKHOLM (Reuters) - Austria’s Peter Handke won the 2019 Nobel Prize for Literature, and the postponed 2018 award went to Polish author Olga Tokarczuk, the Swedish Academy said on Thursday. Two Nobels were awarded this year after last year’s prize was postponed over a scandal that led to the husband of an Academy member being convicted of rape. Since then, the organization has appointed new members and reformed some of its more arcane rules after a rare intervention by its royal patron, the king of Sweden. Handke, 76, won the 2019 prize for “an influential work that with linguistic ingenuity has explored the periphery and the specificity of human experience,” the Academy said in a statement. The 2018 prize went to Tokarczuk for “a narrative imagination that with encyclopaedic passion represents the crossing of boundaries as a form of life.” Handke established himself as one of the most influential writers in Europe after World War Two, the Academy said, with a body of work that contains novels, essays, notebooks and dramatic works. He is also known for co-writing the script of the critically-acclaimed 1987 film “Wings of Desire”. Tokarczuk, 57, trained as a psychologist before publishing her first novel in 1993. Since then, she has produced a steady and varied stream of works and her novel “Flight” won her the high-profile Man Booker International Prize last year. She was the first Polish author to do so. She has courted controversy in her native Poland by touching on dark areas of the country’s past that contrast with the version of history promoted by Poland’s ruling nationalist party, Law and Justice (PiS). Poland holds an election on Sunday that a PiS-led coalition is widely expected to win.

DUBAI – Australia set a new world record for the most consecutive ODI wins, a streak of 22, after beating New Zealand in the first match of the Rose Bowl series at Bay Oval.

LAHORE (92 News) – Dwaine Pretorius’ record five-fer followed by scores of 42 by Reeza Hendricks and Pite van Biljon helped South Africa level the three-T20I series as the tourist defeated Pakistan by six wickets in the second match at the Gaddafi Stadium on Saturday.

MANCHESTER, England (Reuters) – Manchester United closed in on the Premier League’s pole position after a 2-1 home win over Aston Villa on Friday put them level on points and games played with champions and leaders Liverpool.

WASHINGTON (Reuters) – President Donald Trump’s desperate bid to overturn the Nov. 3 election result was dealt another blow on Friday after it was announced he had lost Georgia, while the winner, President-elect Joe Biden, filled more jobs in his incoming US administration.