In Johar Town, a heavy contingent of police was present along with the operation administration against the illegally constructed Khokhar Palace. The entire area was cordoned off. The additional deputy commissioner revenue (ADCR) Lahore and SSP Operations monitored the anti-encroachment operation.

During the Lahore Development Authority (LDA) operation, the back door and wall of Khokhar Palace and the house of Tahir Javed - nephew of Saiful Malook Khokhar - were demolished. 13 shops and several temporary huts have been demolished by the use of heavy machinery.

It was also reported that the government retrieved 38 kanals of state land allegedly illegally occupied by PML-N’s Khokhar brothers. It added that the value of the retrieved land is estimated at around Rs1.5 billion.

It is pertinent to mention here that the district administration stated that the Khokhar brothers had fraudulently encroached upon the land and were served notices prior to the operation. They also claimed that out of 177 kanals, only 131 kanals are owned by Saiful Malook Khokhar and remaining land is illegally occupied.

The LDA has registered a case against Khokhar brothers for intervening in the demolition of the Khokhar Palace. According to the FIR registered at Nawab Town police station, Khokhar Palace was constructed after illegally occupying the lands of people. 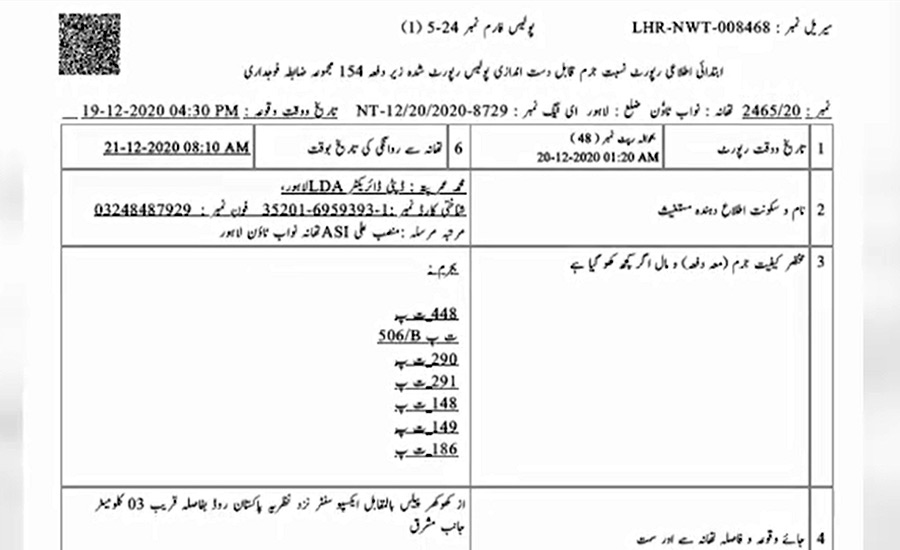 The accused had stopped the operation by erecting barricade.

The case has been registered against 16 nominated accused, including MNA Afzal Khokhar, MPA Saif Khokhar and Shafi Khokhar, and 125 unknown accused.

Vote of confidence drama is an attempt to conceal defeat: Bilawal Bhutto

ISLAMABAD (92 News) – PPP chairman Bilawal Bhutto has said that the vote of confidence drama is an attempt to conceal the defeat.

ISLAMABAD (92 News) – After defeat in Senate election, Prime Minister (PM) Imran Khan has decided to address the nation at 07:30 PM on Thursday (today).

Coronavirus claims more 63 lives across country in a day

ISLAMABAD (92 News) - Pakistan has reported 63 deaths in the last 24 hours by novel coronavirus as the nationwide tally of fatalities has jumped to 13,076 on Thursday.