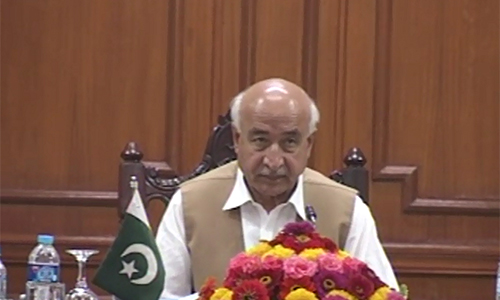 QUETTA (92 News) – Balochistan Chief Minister Dr Abdul Malik has called for an end to unnecessary checkposts manned by the police and Levies. Presiding over a meeting held to review law and order on Friday, he said that they have to make Balochistan peaceful and developed jointly. “We have to avoid every step creating a negative effect among the people. Owing to the steps taken by the government, development and real estate prices have increased manifold,” he said. Commander Southern Command Lt-Gen Nasir Khan Janjua said that the fifth rebellion is meeting its logical end and several people involved in it have known that they were on the wrong path. “There is need to warmly welcome the people returning,” he said. Commander Southern Command Lt-Gen Nasir Khan Janjua said that the Balochistan police are on their feet and they have full cooperation of the Army, FC and intelligence agencies. Balochistan Home Minister Sarfraz Bugti, Chief Secretary Saifullah Chattha, Home Secretary Akbar Hussain Durrani and several military and civil officers were also present.