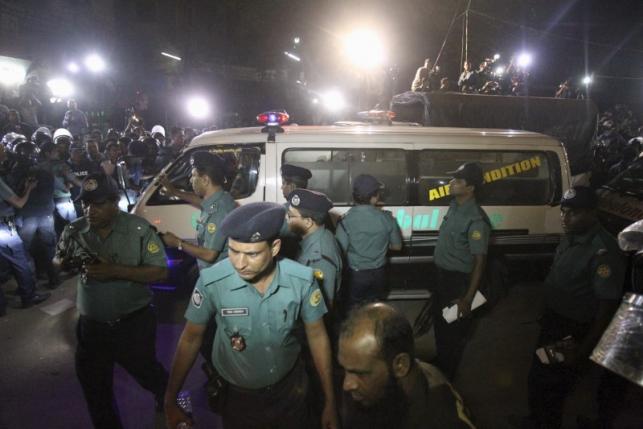 DHAKA (92 News) – Bangladesh executed two opposition leaders Sunday for war crimes during the country's 1971 independence war, despite concerns that the legal proceedings against them were flawed and threats of violence by their supporters. Bangladesh Nationalist Party leader Salahuddin Quader Chowdhury and Ali Ahsan Mohammad Mujahid, secretary general of Jamaat-e-Islami, were hanged at 12:55am at Dhaka Central Jail in the nation's capital, said Senior Jail Superintendent Mohammad Jahangir Kabir. A few hours after the execution, a security detail escorted ambulances carrying the men's bodies to their ancestral homes, where their families were to perform burial rituals. Mujahid, 67, of the Jamaat-e-Islami party, and Chowdhury, 66, were hanged at Dhaka Central Jail. The Supreme Court had previously rejected their appeals against a death sentence imposed by a special tribunal for genocide and torture of civilians during the conflict. The Border Guard Bangladesh paramilitary force has been deployed across the country to tighten security. Mujahid was found guilty on five charges including torture and the murders of intellectuals and minority Hindus while he commanded Al Badr, an auxiliary force of the Pakistani army, during the war to break away from Pakistan. Chowdhury, former legislator from former premier Khaleda Zia's Bangladesh Nationalist Party, was convicted in October 2013 on charges of genocide, religious persecution, abduction and torture during the war.