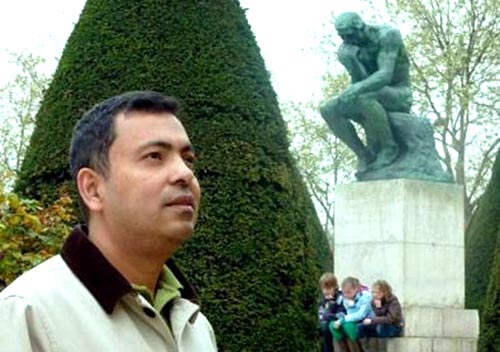 DHAKA (Reuters) - Bangladesh's anti-terrorism unit said it had arrested on Monday the main suspect in the killing of a US blogger who was hacked to death in Dhaka last week in the latest attack on critics of religious extremism in the Muslim-majority nation. Forces from the Rapid Action Battalion (RAB) arrested Farabi Shafiur Rahman, who was previously jailed for his ties to the extremist Hizbut Tahrir Islamist group, at a bus stop in Dhaka, a RAB spokesman told reporters. The spokesman said Farabi had confessed to threatening to kill blogger Avijit Roy. Farabi was still being interrogated. Roy, an engineer of Bangladeshi origin, was killed by machete-wielding assailants on Thursday while returning from a book fair. His wife and fellow blogger Rafida Ahmed suffered head injuries and lost a finger. She remains in hospital. The police said Farabi was arrested in 2013 for social media comments that supported the murder of another blogger, Ahmed Rajib Haider, but he was later released on bail. Last year, Farabi posted on Facebook: "It's a holy duty of Bangalee Muslims to kill Avijit", the police added. Roy's killing comes amid a crackdown on hardline Islamist groups, which have increased activities in recent years in the South Asian nation. In 2013, religious militants targeted several secular bloggers who had demanded capital punishment for Islamist leaders convicted of war crimes during Bangladesh's war for independence. Media group Reporters Without Borders rated Bangladesh 146th among 180 countries in a ranking of press freedom last year.