Bank of England to consider bans for executives behind HBOS failure 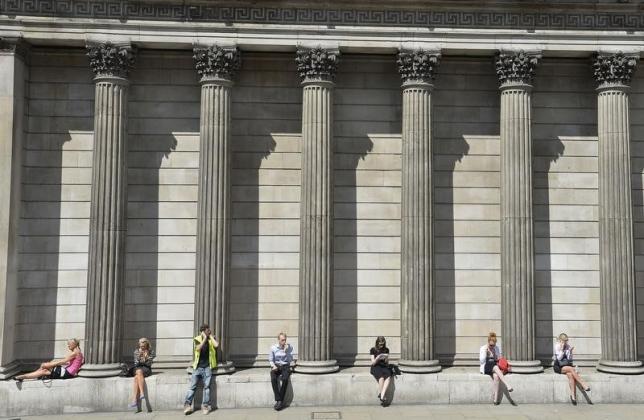 Bank of England to consider bans for executives behind HBOS failure

LONDON - British regulators will consider barring up to 10 executives linked to the 2008 collapse of the country's biggest mortgage lender, HBOS, some of whom still hold senior business roles. The Bank of England and the Financial Conduct Authority's (FCA) long-delayed report into HBOS was published on Thursday and blamed the HBOS management for its failure and criticised the previous regulator, the Financial Services Authority (FSA). A separate report by independent lawyer Andrew Green, also published on Thursday, examined whether the FSA was sufficiently rigorous in holding HBOS executives to account. Green's report said the Bank of England and FCA should review the FSA's decision not to act against 10 executives including Andy Hornby, who was HBOS chief executive at the time of the collapse and has since become chief operating officer of gambling company Gala Coral. "We will do this piece of work as soon as possible," Bank of England Deputy Governor Andrew Bailey told a news conference, adding that Britain's business ministry could disqualify former HBOS directors from serving on other company boards. HBOS, which traded under the brands Halifax and Bank of Scotland, had to be rescued in a government-engineered 2008 takeover by rival Lloyds (LLOY.L), which subsequently needed a 20 billion pound bailout of its own. The bailout of Lloyds and its rival Royal Bank of Scotland (RBS)(RBS.L) swelled Britain's national debt, prompted lasting public outrage at bankers and triggered a revamp of British financial regulation. The regulators' report reached similar conclusions to one by lawmakers in 2013 and Bailey said it highlighted the need to resist political pressure for light-touch bank regulation. "HBOS was at root a simple bank that nonetheless managed to create a big problem," Bailey said. Reckless lending in Britain, Ireland and Australia, particularly in commercial real estate, as well as reliance on insecure sources of financial market funding were behind HBOS's collapse. HBOS was not involved in "racy" investment banking activities and its mortgage lending suffered smaller losses. POTENTIAL TARGETS Others who could attract the scrutiny of the BoE and FCA include former HBOS chairman Dennis Stevenson, a member of Britain's upper house of parliament, and Lindsay Mackay, the former chief executive of HBOS's treasury division, who is now CEO at Alpha Bank London Limited. International law firm Ashurst said Stevenson and seven other former non-executive directors of HBOS disagreed with a number of the report's conclusions, saying that they downplay the unforeseen impact of the financial crisis on HBOS and did not contain evidence that would justify enforcement action. Regulators cannot impose criminal penalties but could bar former HBOS staff from working in Britain's financial services industry. Seven former HBOS executives or board members still hold senior UK finance roles. These include Skipton Building Society Chairman Mike Ellis and the chief executive of Tesco's personal finance arm, Benny Higgins. Others, like Hornby, work in different sectors. Gala Coral said that Hornby had earned "the continuing support of our colleagues, management and shareholders". Skipton said in a statement that Ellis has the "wholehearted confidence" of its board. The government agency responsible for disqualifying company directors said it decided in 2013 that it was not in the public interest to pursue action against HBOS executives but could review this after the BoE and FCA had concluded their action. Andrew Tyrie, the head of the British parliament committee that conducted an earlier HBOS investigation, said regulators should decide on bans "within months, not years" and that the role of HBOS's auditors, KPMG, needs further investigation. KPMG declined to comment, while the Financial Reporting Council that polices accountants said it would study the report. To date, only the head of HBOS's corporate lending division, Peter Cummings, has faced any formal sanction as a result of the bank's collapse. After the bailouts of Lloyds and RBS, the FSA was scrapped, its powers handed to the Bank of England and newly created FCA, and the reckless management of a bank was made a criminal offence. The government is now close to completing the sale of its Lloyds stake back to the private sector, while the Bank of England is in the midst of implementing tougher regulations in the aftermath of the financial crisis. With some banks having lobbied politicians over what they see as a risk of the Bank of England becoming too interventionist, Bailey warned against the "siren voices" calling for looser regulation and said the HBOS case showed that rules need to remain strict throughout the political and business cycle. Thursday's report had been due before the end of 2014 but was delayed by the legal requirement for those criticised in it to be given a right to reply. Cummings, who called the original judgment against him "unfair and ... a bit sinister", required that parts of certain regulatory documents referring to him be blacked out. Cummings, Mackay and Stevenson were not immediately available for comment on the report. -Reuters