Beijing aims to refill medicine chest with 'Made in China' drugs 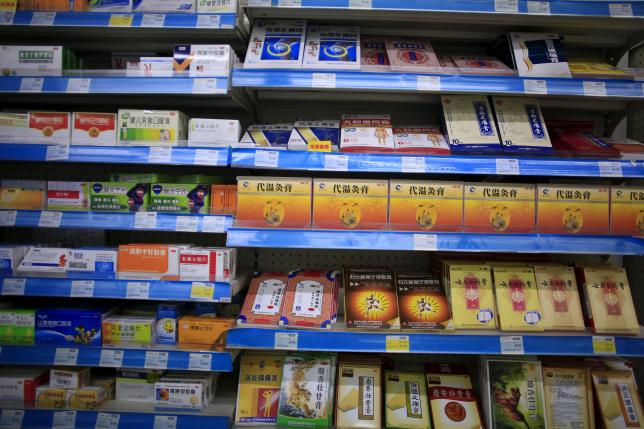 Beijing aims to refill medicine chest with 'Made in China' drugs

SHANGHAI - China, already a global powerhouse in high-tech areas from solar panels to bullet trains, is turning its industrial might to the challenge of making more of its own drugs for a vast and aging population.

Given the 10 years or more it typically takes to bring a new medicine to market, original "Made in China" treatments won't arrive overnight, but multinationals are already encountering more competition from local generic drugs that look set for a quantum leap in quality.

The stakes are high. China is the world's second biggest drugs market behind the United States, and fast food, smoking and pollution have fueled a rise in cancers and chronic heart and lung diseases.

The country also has more diabetics than any other in the world, with numbers expected to hit 151 million by 2040 from 110 million today, according to the International Diabetes Federation.

That has made China a sweet spot for Denmark's Novo Nordisk; the world's biggest insulin producer has mined a rich seam in the country since opening production facilities here in 1995.

By 2010, it dominated 63 percent of China's insulin market. But it has recently been losing ground to local competitors cheered on by Beijing.

"China is going to be tough for us for the next couple of years," said Chief Science Officer Mads Krogsgaard Thomsen. "Right now, the country is very focused on building domestic production."

Greater local competition is also evident in other areas, helping the top 10 Chinese drugmakers grow sales 12 percent on average this year, according to IMS Consulting - twice the rate of multinationals, which suffered a setback from a bribery scandal at GlaxoSmithKline two years ago.

GSK itself has seen its drug sales slump.

"Branded generics are something that exist today, but the need for them in 10 years time is not going to be there," said Luke Miels, AstraZeneca's global portfolio head.

That means foreign firms will be more reliant on new, patented medicines, although the scale of demand for such expensive products is uncertain in a country with only basic health insurance cover.

At the other end of the spectrum, multinationals aim to build up volume, often in partnership with local players, in the big markets outside China's top cities, where distribution costs are high and prices low.

"It's the right thing to do, even if profit margins shrink," said the head of one big multinational.

Pivotal to the transformation of the market is the China Food and Drug Administration, led by reformist boss Bi Jingquan since January.

The watchdog has promised to speed up approval of innovative new drugs, which can take 5-7 years, while cracking down on substandard local generics.

"This creates lots of opportunities for local Chinese companies that have a strong focus on innovation," said a spokesman for China's Fosun Pharma, which sees itself among the winners.

It is not alone. A cluster of drug research labs in eastern Shanghai highlights the promise of China's life sciences sector. The area brings together multinational and local firms, alongside contract research businesses and small biotech operations.

Among the latter is Hua Medicine, led by Chinese-born, Western-educated Chief Executive Li Chen, who used to run Roche's China R&D center. Now he is developing a novel diabetes treatment, licensed from Roche, while working on Hua's own promising leads.

Another standard-bearer for Chinese biotech is Beijing-based cancer specialist BeiGene, which last month announced plans for a $100 million initial public offering on Nasdaq.

At a time when China's academic researchers have grabbed headlines by editing the genes of human embryos, such start-ups highlight the commercial potential of China's biotech know-how.

The history of failure in drug development suggests they won't have an easy ride, but GSK's China R&D head Min Li, a returnee from America, believes "there is a real chance for China to leap ahead in life sciences".

"It's probably been taking everyone a little by surprise, the sheer scale of that," he said. "As we hit the next decade in the 2020s, I'd be very surprised if there wasn't at least a top 20, if not top 10, global pharma player that was headquartered in China." -Reuters