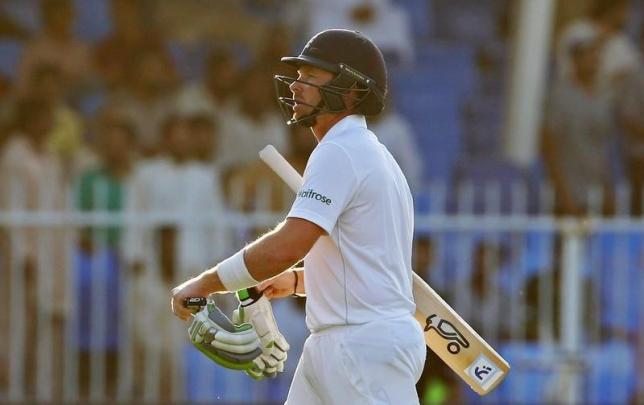 LONDON - England batsman Ian Bell has been dropped from the test squad for the December-January series against South Africa, the England Cricket Board (ECB) announced on Thursday. The 33-year-old has played 118 tests for England, scoring 7,727 runs and winning five Ashes series since becoming a regular in the side following his debut in 2004, but disappointed in the recently concluded series against Pakistan. "Ian Bell has been an outstanding player for many years and undoubtedly still has plenty to offer England in the future," England selector James Whitaker said in an ECB statement. "It was clearly a difficult decision but he has struggled for runs in recent series and we felt that it was the right time for him to take a break and spend time working on his game out of the spotlight." Batsmen Nick Compton and Gary Ballance have been recalled to the squad for the four-test series alongside two previously uncapped players in left-arm seamer Mark Footitt and explosive opener Alex Hales. Pace bowlers Mark Wood (left ankle) and Steven Finn (left foot) will miss the tour due to injury. England arrive in South Africa on Dec. 11 with the first test starting in Durban on Dec. 26. The other three tests are at Cape Town, Johannesburg and Centurion. England squad: Alastair Cook (captain), Moeen Ali, James Anderson, Jonathan Bairstow, Gary Balance, Stuart Broad, Jos Buttler, Nick Compton, Mark Footitt, Alex Hales, Chris Jordan, Samit Patel, Joe Root, Ben Stokes, James Taylor, Chris Woakes -Reuters