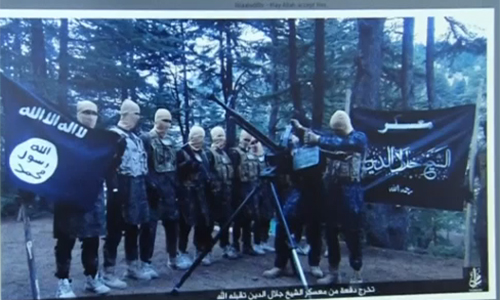 BERLIN – Cut one head off, two others grow back. Like the Greek mythological creature Hydra, Islamic State's online outlets are proving difficult to eliminate. Simon Mullis, FireEye Global Technical Lead, says: "Covert channels being used at every step of the way. People are trying to hide themselves, the attackers are trying to hide who they are, they're trying to disguise the next phases of the attack and evade, and there are so many ways to do that that is becomes a very, very tough problem." Mobile messenging app Telegram is racing to shut down broadcast channels used by the militants. The Berlin-based company says it's closed 78 IS-related channels in 12 languages on its site. But the group continues to create more. Security researchers say the encrypted service is being used to spread propaganda and recruit members. It was also the way IS claimed responsibility for the Paris attacks last Friday. Telegram says it's making efforts to block public channels used by Islamic State but wants to protect freedom of expression. Eric Auchard is Reuters chief technology correspondent. Eric Auchard, Reuters chief technology correspondent, says: "The service is used very widely around the world, often by people who have something to fear from their governments, political dissidents. Telegram wants to keep those channels open for those people. Islamic State is exploiting that and Telegram is finding it hard to strike a balance between those two audiences." IS supporters are continuing to take advantage - often simply changing a letter or adding a number to their names. And then there are the private members-only chat facilities which remain exempt from scrutiny. –Reuters