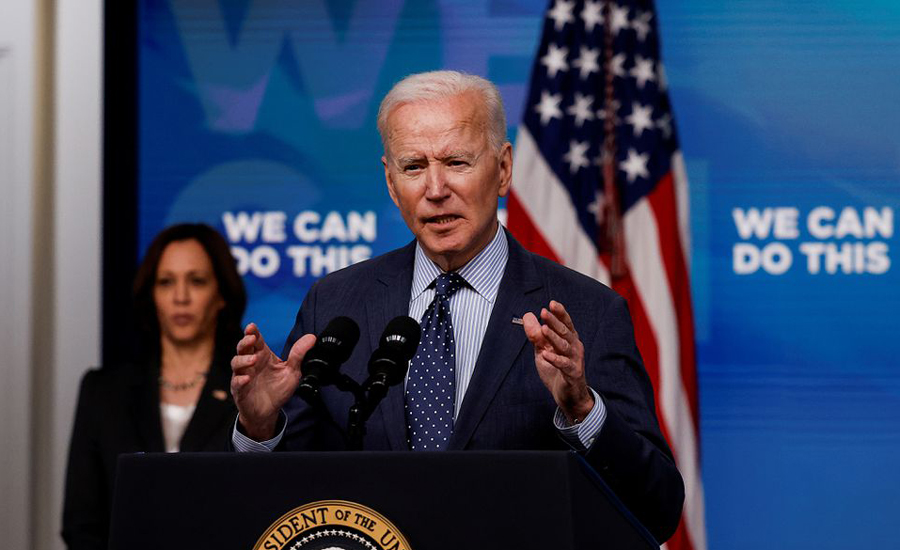 WASHINGTON (Reuters) – The White House laid out a plan for the United States to share 25 million surplus COVID-19 vaccine doses to the world, with the first shots shipping as soon as Thursday, and said it would ease other countries’ access to US-made supplies for vaccine production.

President Joe Biden said the United States would give the vaccines without expectation of political favors in return. The dose shipments are the first of some 80 million COVID-19 vaccines that Biden has pledged to provide internationally this month as concern grows about the huge disparity in vaccination rates between advanced economies and developing countries.

The United States will donate nearly 19 million doses through the COVAX international vaccine-sharing program, Biden said in a statement. Through COVAX, some 6 million doses would go to Latin America and the Caribbean, about 7 million doses to South and Southeast Asia and roughly 5 million to Africa.

The remaining doses, amounting to just over 6 million, would go directly from the United States to countries including Canada, Mexico, India and South Korea, he said.

Although the United States is working through COVAX co-run by the World Health Organization, the White House retains final say in which countries receive U.S. doses and how many, said national security adviser Jake Sullivan.

The White House will base donation decisions on "factors included achieving global coverage, responding to crises ... and helping as many countries as possible," Sullivan said, adding the United States intends to prioritize its neighbors, including Canada, Mexico and countries in Central and South America.

The 25 million doses would be delivered quickly, with some going out as soon as Thursday, the White House said.

For months, the White House remained focused on getting Americans vaccinated as the coronavirus killed more than half a million people in the United States. But Biden promised the United States would become a supplier and send abroad at least 20 million doses of the Pfizer Inc (PFE.N)/BioNTech SE , Moderna Inc (MRNA.O) and Johnson & Johnson (JNJ.N) vaccines, on top of some 60 million AstraZeneca Plc (AZN.L) doses he had already planned to donate.

The 25 million doses Biden announced on Thursday will not include supply from AstraZeneca, the White House said.

International organizations including the United Nations and the World Bank welcomed the announcement. "It’s a good start, and I am hoping that more doses will be made available," World Bank President David Malpass said.

For Southeast Asian countries, it is a "symbolically important" first step, but the dose shipments are a "drop in the bucket" compared to what is needed in the region, said Alex Feldman, head of the U.S.-ASEAN Business Council, a lobbying group. He added that Indonesia, the Philippines, Vietnam and Thailand are facing serious difficulties with COVID-19.

The White House is also removing special powers it granted through the Defense Production Act (DPA) to certain vaccine makers that received U.S. funding but do not yet have U.S. approvals, including AstraZeneca, Sanofi SA/GlaxoSmithKline Plc (SASY.PA), (GSK.L), and Novavax Inc (NVAX.O).

The DPA ratings give U.S. producers priority access to supplies and equipment needed to manufacture the vaccines that are in short supply around the world. Lifting them could free up raw materials for major vaccine makers elsewhere, especially the Serum Institute of India (SII).

SII, the world’s largest vaccine maker and a top supplier of COVID-19 shots to low- and middle-income countries, had criticized the use of the DPA, and Reuters reported in May that a shortage of U.S.-made raw materials would hit production of Novavax’s vaccine.

The International Monetary Fund and World Bank on Thursday urged the Group of Seven advanced economies to release any excess COVID-19 vaccines to developing countries as soon as possible, and called on manufacturers to ramp up production to benefit poor countries.

Many Latin American countries have a dire need for vaccines as they combat outbreaks. Brazil has been one of the world’s hardest-hit countries by the pandemic, reporting more than 15 million cases and 400,000 deaths.

Peru this week revised its COVID-19 death toll, making it the country with the worst per-capita fatality rate.