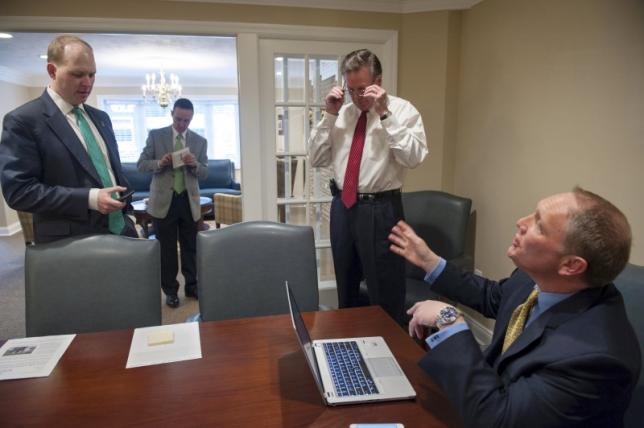 PITTSBURGH - Secret contracts, covert real-estate deals, scurrying around after nightfall to avoid detection: this is how far big-bank brokers are prepared to go when they plan to go independent. It is a risky enterprise. If the brokerage learns that someone intends to leave, it often dismisses the broker so the bank can try to retain clients. The Botkin Group, a team of brokers in Pittsburgh who produced $1.6 million in revenue last year for Morgan Stanley, went so far as to require non-disclosure agreements from contractors who made new signs, installed phones and delivered furniture to their new office. They never visited the building during daylight, always staggered their arrival times and parked in the back. "We felt like we worked for the CIA," said Lester H. Botkin, 35, the youngest of the group, which also includes his father, Lester P. Botkin, 63, sister, Sara Botkin, 37, and one client service associate. They represent growing numbers of brokers who are leaving big bank brokerages, such asMorgan Stanley, Bank of America's Merrill Lynch, Wells Fargo Advisors and UBS Group AG to branch out on their own. The big four brokerages lost nearly 7 percent of their market share to independent firms between 2008 and 2013, according to Boston-based research firm Cerulli Associates, a leading global analytics firm. In the next five years, Cerulli expects independent advisory firms to surpass the big brokerages in their control of the market, according to a survey of 7,000 brokers working at firms across the industry. Most departures so far have concerned brokers who managed relatively few assets. Analysts and industry sources say they expect 2015 to be a turning point for financial advisers who manage more than $200 million in assets at the four big Wall Street brokerages collectively referred to as wirehouses. The reason is that many of the retention bonuses those firms gave employees during the 2008 financial crisis will reach their final installments this year. At the same time, several brokerages have started deferring more of advisers' current pay. Cerulli estimates 30 percent of wirehouse advisers are considering going independent. LOWER FEES, MORE INCOME Historically, best-performing brokers have hopped from one of the big four to another at least once in their career, collecting multi-million-dollar sign-on bonuses in the process. Some recent high-profile moves followed such a pattern: a team of Merrill Lynch advisers who managed $6.5 billion in assets left for Morgan Stanley while a group of Morgan Stanley brokers with $1.6 billion under management switched to Merrill Lynch. The Botkins also considered leaving Morgan Stanley for another big bank that offered them $5 million over 9 years, including a $1.6 million up-front payment. But more brokers are opting to go independent because many brokerages have raised clients' fees and minimum balances, and pressured brokers to lend more. "If you're a big team and banking is an important part of your business, then a wire can be a wonderful place," said Sara Botkin. "But if you're more focused on financial planning and investment strategy, it can be a harder place to run your business." Lester P. Botkin said that in recent years, Morgan Stanley had pressured brokers to charge typical clients more than 1.25 percent. If he, in a mid-size market like Pittsburgh, wanted to charge clients less, it came out of his paycheck. Morgan Stanley said advisers were allowed to negotiate fees with clients and were under no obligation to charge the 1.25 percent rate. It declined to comment on any further aspects of the article. The Botkins estimate they will nearly double their annual take-home pay by running their own business, despite higher expenses. Their new business, Botkin Family Wealth Management, pays LPL Financial Holdings Inc, a leading provider for independent wealth management business, for technology, compliance and trading services. CLIENT LIST AND A PICTURE All the Botkins took from Morgan Stanley's office the day they left was a framed painting of a section of the Augusta National Golf Club's course called "Amen Corner," and contact information for about 400 clients. All the clients they contacted agreed to join the new firm, they said. Typically, advisers who move keep 80-90 percent of their clients. Client surveys find that those who move with advisers usually do so because they value personal relationships they develop with brokers and do not want to be assigned to someone new. Publicly, bank executives play down broker departures, but they have been taking steps to blunt their impact wealth management, which has been playing a growing role in generating banks' profits. For example, wealth management accounted for 49 percent of Morgan's net revenue in 2014, up from about 40 percent in 2010, the year after it expanded the business by buying Smith Barney. As Reuters reported in February, Bank of America has been making it harder for brokers to take clients with them when they leave, modifying an industry-wide agreement on what client information advisers can take with them. Mindful how much is at stake, brokers are taking no chances. The Botkins kept a sign outside of their new office that said "fabulous building for sale" as a decoy until after they moved in.