Addressing a big gathering on the 11th death anniversary of PPP former chairperson Benazir Bhutto on Thursday, he said that the prime minister does not know that how much foundations of the federation have weakened.

“Why do the cleverness of the NAB is to arrest the opposition?” he questioned.

The PPP chairman said that professors are arrested. “Why does an action not taken against Aleem and Aleema Khan?” he said.

He also accused the government of making cases against the female members of his house.

Bilawal Bhutto also raised the voice for the rights of Gilgit-Baltistan and missing persons of Balochistan. 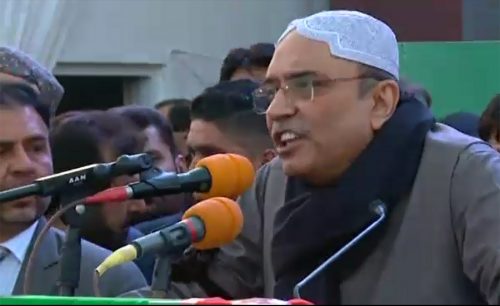 PPP co-chairman Asif Zardari said that the burst drums of the favourite had again challenged him. “Rulers can do nothing except to level allegations against their opponents,” he said.

He said that the PPP had earlier countered the opponents and will again counter them in future.

Asif Zardari expressed the resolve to make the government again. “Bilawal is the son of Benazir and Asif Zardari. How can you intimidate him?”

He said that the rulers are claiming of doing too much work during 100 days. “In fact they do not know how to do work,” he added.