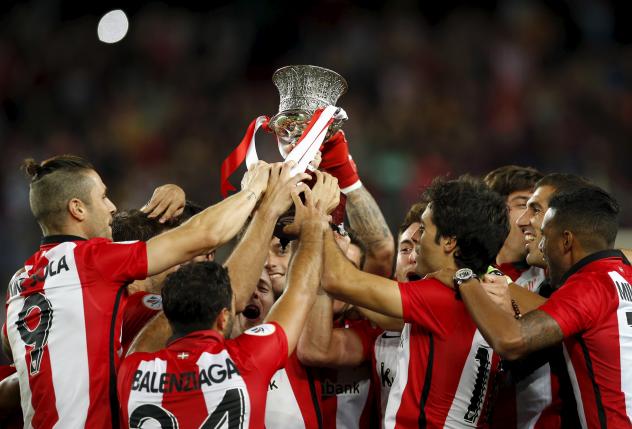 BARCELONA - Athletic Bilbao claimed their first silverware in more than three decades when they wrapped up a 5-1 aggregate win over 10-man Barcelona to win the Spanish Super Cup on Monday and unleash ecstatic celebrations in the Basque city. Bilbao, who only field players of Basque origin, last secured a major trophy when they won Spain's traditional season opener in 1984 and Friday's 4-0 drubbing of the Spanish and European champions in the first leg at the San Mames left Barca with too much to do at the Nou Camp. After waves of sustained pressure, Lionel Messi gave the home side a 1-0 second-leg lead shortly before halftime when he chested down a clever Luis Suarez layoff and clipped a close-range volley into the net. Barca's hopes suffered a blow 10 minutes into the second half when centre back Gerard Pique was shown a straight red card after he strode angrily over to the side of the pitch and shouted in the referee's assistant's face to protest a decision. The incident seemed to give Barca renewed energy and Pedro and Ivan Rakitic immediately had chances to make it 2-0 before Suarez fired wildly over when through on the left. However, the home defence left a gaping hole at the back 16 minutes from time and Aritz Aduriz, who netted a hat-trick in the first leg, was able to score at the second attempt past Claudio Bravo sending the travelling fans inside the giant arena into raptures. Not even a late red card for substitute Kike Sola could tarnish Bilbao's joy as they ended Barca's hopes of repeating their 2009 feat when they won all six competitions they contested: the Champions League, La Liga, the King's Cup, the European Super Cup, the Spanish Super Cup and the Club World Cup. "If you wrote the script it's impossible it would turn out like this," an emotional Aduriz said in an interview with Spanish television. "For us, for what it means to win a title for Bilbao, it's the greatest thing that could happen and against Barca as well," he added. "We have to compete against the rest of the world and it's an incredible thing." Barca need to recover quickly for Sunday's trip to face Bilbao again in their opening La Liga match of the campaign, when they begin their bid for a sixth title in eight years. -Reuters