Black Cap Bracewell gets the nod for Brisbane test 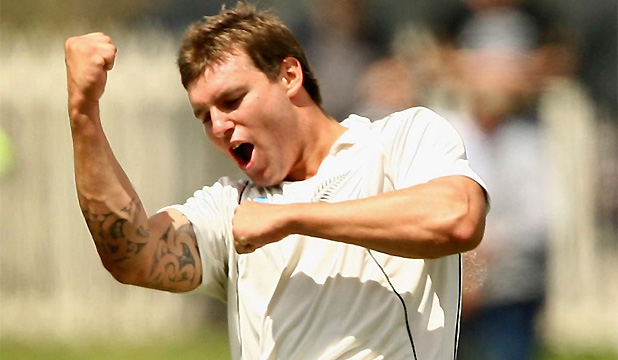 Black Cap Bracewell gets the nod for Brisbane test

SYDNEY - New Zealand will be hoping Doug Bracewell can revive his form of 2011 after he was named as the third seamer in Brendon McCullum's pace attack for the opening test against Australia in Brisbane on Wednesday. Although his stock is not nearly as high as fellow quicks Trent Boult and Tim Southee, Bracewell's match-winning performance against Australia in Hobart four years ago will always give him a special place in New Zealand's test history. In only his third outing, Bracewell took a match haul of 9-60 and the wickets of Ricky Ponting, Michael Clarke and Michael Hussey in one dizzying spell as the Blacks Caps won their first test on Australian soil since 1985. The 25-year-old has not entirely fulfilled the potential he displayed at Bellerive Oval but his recent performances have been strong enough for him to be preferred to Matt Henry for the first test, which starts on Thursday. "It was a bit of a coin toss with them but we were comfortable either way," McCullum told reporters at the Gabba on Wednesday. "They're both very similar bowlers. We just thought Doug was bowling a touch better at this time." McCullum also confirmed that all-rounder James Neesham would bat at number six ahead of wicketkeeper BJ Watling. Unbeaten in seven test series since 2013, New Zealand are widely viewed to have their best chance in a good while to secure a second series victory on Australian soil to go with the Richard Hadlee-inspired 1985 triumph. "It's been a while and nice to know when you enter a series against Australia that you've got three tests, to test yourself against one of the best teams in the world," McCullum added. "We're under no illusions how difficult our task is but we're in a good space. I'm pretty confident our guys will play well and if we are beaten then we'll make it bloody tough for them to do so." Hadlee was at the Gabba on Wednesday, 30 years after he took 15 wickets to fire New Zealand to their only win at the ground. While the pace bowling great made the hosts slight favourites for the series, which continues after Brisbane with tests in Perth and Adelaide, the 64-year-old liked what he saw in the 2015 New Zealand side. "Test cricket particularly needs some sort of revival," he told reporters. "The brand and style of the game we are playing under Brendon McCullum (is) exciting, attacking, aggressive and pro-active. "It's high risk but has great rewards. This is an exciting side, and it's worth watching them go about their business." Team: Tom Latham, Martin Guptill, Kane Williamson, Ross Taylor, Brendon McCullum, James Neesham, BJ Watling (wicketkeeper), Mark Craig, Doug Bracewell, Tim Southee, Trent Boult. -Reuters