QUETTA (92 News) – A massive suicide car explosion in a highly secure area of the provincial capital’s Gulistan Road near IG Office has killed at least 13 people including five police personnel and wounded more than 20 including police personnel on Friday.

The explosion took place early in the morning in Quetta’s Gulistan Road near IG Office when the streets were packed with commuters and just days ahead of the Eidul Fitr.

The law enforcement agencies reached the spot and cordoned off the area.

The explosive material was planted in car which completely destroyed in the explosion.

Around 20-25 kilogram of explosive material was used in the explosion, the nature of the blast could not be ascertained yet.

Talking to media, DIG Police Quetta Abdul Razzaq Cheema said that the blast occurred when the vehicle was stopped for routine checkup.

He said that according to eye witness the blast occurred in the vehicle, adding that two cars destroyed in the explosion.

The DIG Police said that it appeared the bomber had detonated a car packed with explosives.

Balochistan government spokesperson Anwarul Haq Kakar said that as per initial reports, the incident was the result of a suicide car bombing.

Expressing grief and sorrow over the loss of precious lives in the incident, he prayed for the early recovery of the injured.

In their messages, they expressed grief and sorrow over the loss of precious lives in the bomb blast. 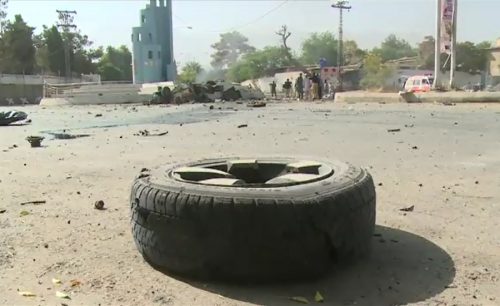