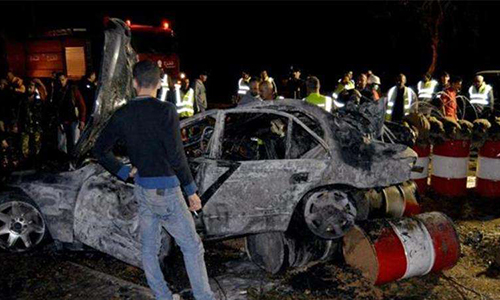 BEIRUT – A roadside car bomb killed at least nine people and wounded four others in northeast Lebanon on Thursday, in an area close to the Syrian border where violence has spilled over from the war next door, security sources said. The blast ripped through a commercial area of the Sabil neighborhood of the town of Arsal. Emergency services were working to rescue people from the rubble, local media said. Militants linked to the conflict across the border in Syria have carried out attacks in and around Arsal in the past. Security sources said the blast was likely to have targeted an independent religious society made up of Syrian scholars. The head of the society, Sheikh Othman Mansour, was among the dead, the sources said. Lebanon's National News Agency said the society had been involved in negotiations for the release of Lebanese soldiers still being held by Islamist militants after being captured when fighters overran Arsal last year. Militants from al Qaeda's Syria branch, the Nusra Front, were involved in the clashes that led to the soldiers' capture. Syria's civil war has regularly spilled over into Lebanon, which shares a more than 300 km (190 mile) border with its bigger neighbor, and is still rebuilding after its own 15-year civil war. There have been clashes between gunmen loyal to opposing sides in the Syrian conflict, as well as strikes on the army and cross-border attacks by Syrian rebels. The last significant security incident in the area took place on Saturday, when Lebanon's army fired at a vehicle carrying Islamist militants, killing three of them. A separate attack by the Lebanese Shi'ite Muslim group Hezbollah in October killed five Islamic State fighters elsewhere in the north of the country, security sources said. The army fought several days of deadly battles with insurgent groups including Islamic State and Nusra Front during last year's incursion into Arsal. The two Sunni Islamist groups have a limited presence in western Syria near the Lebanese border. –Reuters