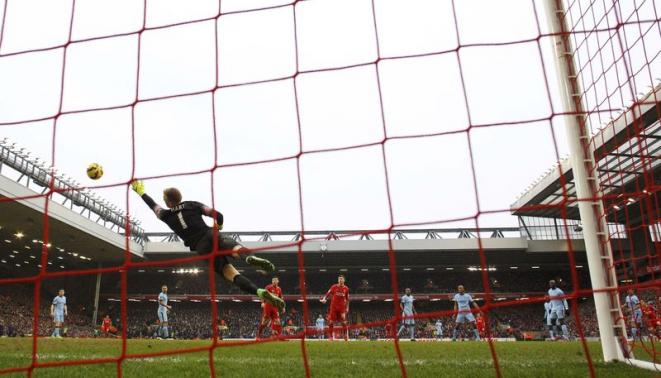 LONDON (Reuters) - Liverpool dented Manchester City's Premier League title aspirations with a 2-1 home win over the champions on Sunday as Arsenal moved up to third with a 2-0 victory against Everton. Superb curling efforts from Jordan Henderson and Philippe Coutinho either side of an Edin Dzeko strike gave Liverpool the win, extending their unbeaten run to 11 league games. It was a serious blow to City manager Manuel Pellegrini and his second-placed team's hopes of retaining their title as they missed the chance to close the five-point gap on leaders Chelsea, who play Tottenham Hotspur in the League Cup final later on Sunday. Arsenal got over Wednesday's 3-1 home defeat by AS Monaco in the Champions League when France striker Olivier Giroud, who missed a glut of chances in that defeat, swept in a corner after 39 minutes in a tight game against Everton at the Emirates Stadium. Substitute Tomas Rosicky added a late second with a long- range strike to make sure of the win for the north London side. Victory meant Arsene Wenger's side leapfrogged Manchester United in the table and moved four points behind City. Liverpool nudged ahead of Southampton into fifth.