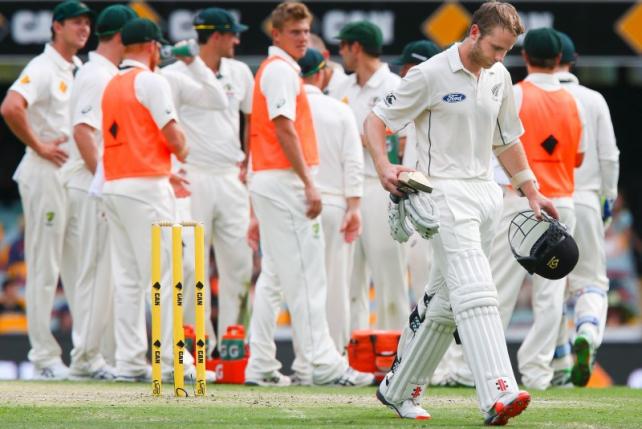 BRISBANE - Australia took a big step towards victory when they removed dangerman Kane Williamson just before tea on the fourth day of the first test against New Zealand on Sunday but the Brisbane weather prevented any further progress. Williamson's departure for 59 helped to reduce New Zealand to 142 for three at the break -- 361 runs in arrears -- but a rain storm wiped out the final session and ensured the match would go into a fifth day. Ross Taylor, who has made 20 not out, and New Zealand skipper Brendon McCullum (4) will resume on Monday looking to bat out the final day and save the test. Australia declared their second innings closed on 264-4 before the start of play on Sunday but home hopes of a quick win to take a 1-0 lead in the three-match series fell foul of a combination of the weather and obdurate Black Caps batting. New Zealand's victory target of 504 was always a highly improbable goal but anything looked possible while first-innings centurion Williamson remained at the crease. The 25-year-old, who scored 140 in the first innings, looked to be heading comfortably for the break when Nathan Lyon took his second wicket to make what could be a crucial breakthough. Williamson attempted a pull shot but the spinner's delivery turned to hit his thigh and the third umpire confirmed the lbw decision on review. Lyon earlier broke a 54-run partnership between Williamson and Martin Guptill when the opener got a thick edge which skipper Steve Smith caught in the slips. "I thought we bowled really well after lunch today, give New Zealand credit they made us work hard," Australia coach Darren Lehmann told Channel Nine. "Couple of key wickets for Nathan Lyon there so not a bad day. We'd like to have a bit more cricket but you can't control the weather." Guptill's 23 came from 133 balls in 186 minutes and he had missed catches from Joe Burns and Lyon before lunch to thank for lasting that long. The other opener, Tom Latham, was the first batsman to fall, making 29 from 71 balls before being trapped lbw by a Mitchell Starc yorker with 44 runs on the board. The breakthrough came minutes before drizzle and bad light brought up an early and extended lunch break. Mitchell Johnson's first five overs were maidens and it was not until the final ball of his sixth that he finally conceded runs when Guptill clipped three off his pads through midwicket. The hosts made 556 for four declared in their first innings before dismissing New Zealand for 317 on day three at the Gabba.   SCOREBOARD