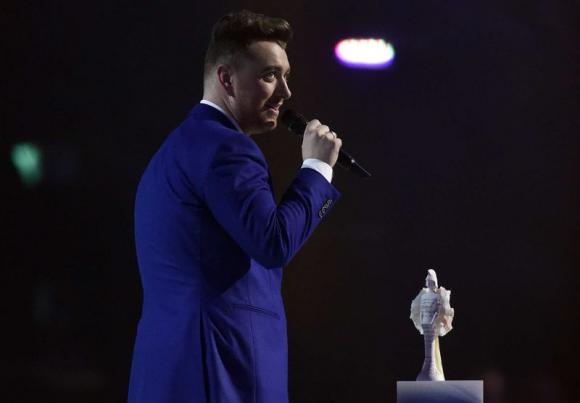 LONDON (Reuters) - Fallout from the Brit awards shook up the music charts on Sunday, knocking US rock band Imagine Dragons off the top spot in favour of English singer/songwriter Sam Smith, data from the Official Charts company showed. Smith won the British BreakThrough Act award at last week's ceremony, helping lift sales of his album "In the Lonely Hour" to number one from number two. By contrast, "Smoke & Mirrors," by Imagine Dragons, last week's number one, fell to twelfth place. British singer Ed Sheeran, winner of British Male Solo Artist, grabbed the number two spot with "X", while British hard rock group Royal Blood, winners of the British Group award, bagged the third slot, up 15, with their self-titled album. In the singles chart there was no change from last week. Ellie Goulding topped the chart for a fourth week, the Official Charts Company said, with her track "Love Me Like You Do," a song which appears in the "Fifty Shades of Grey" movie. Hozier's "Take Me To Church" held steady in second, and Mark Ronson's "Uptown Funk" featuring Bruno Mars, remained in third place.