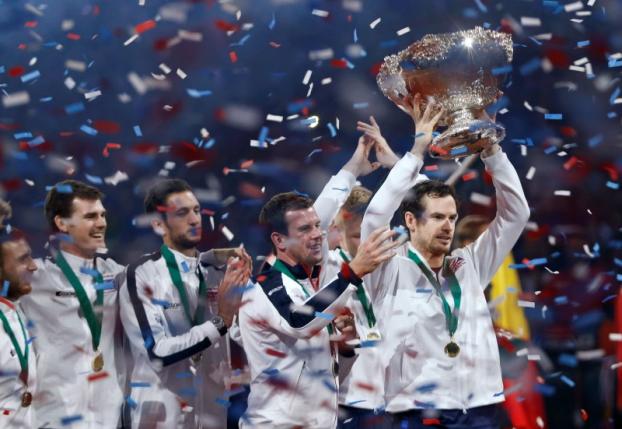 GHENT - Incredibly, improbably, Britain will end the year as world champions of tennis after beating Belgium in the Davis Cup final, but that grand title rests squarely on the shoulders of one extraordinary player.

The 115-year-old event is held up as the sport's most prestigious team competition, but never has one individual been so instrumental in winning it as two-times grand slam champion and Olympic gold medallist Andy Murray was this year.

The 28-year-old Scot won all three of his matches in Ghent, two singles and a doubles with brother Jamie in between. The final scoreline could just as well have been added to the record books as 'Dunblane 3 Belgium 1'.

Of the 12 rubbers Britain won en route to their first Davis Cup title for 79 years, a run that included wins over the heavyweights the United States, France and Australia, Murray featured in all but one of them.

Take him out and perennial under-achievers Britain would still be scrapping with the also-rans, as they were in 2010 when Leon Smith took over as Davis Cup captain and needed to beat Turkey to avoid falling into the fourth tier of the competition.

Admittedly, even before Murray fixed his sights on Davis Cup glory and committed 100 percent to the cause in 2013, Smith's galvanising influence had already begun to have an effect.

The likes of James Ward and Dan Evans were edging Britain back towards the higher echelons, but to cut it in the World Group a country usually needs one special player together with some top-class back-up.

Swiss Roger Federer had Stanislas Wawrinka last year when he won the competition for the first time.

Rafa Nadal had David Ferrer in 2011 and 2009, while the current world number one Novak Djokovic had Viktor Troicki and Janko Tipsarevic in 2010.

Deprived of those two for company in 2013, Djokovic was on the losing side in the final against the Czech Republic despite winning two rubbers.

In the semi-final, when Murray also won two singles and the doubles with Jamie, 183rd-ranked Evans was the singles back-up.

In the quarter-finals against a talent-laden French outfit, 156th-ranked Ward played second singles. Again Murray needed to put in a triple shift.

Ward did crucially beat John Isner in the first round win against the United States in the March, but other than that it has been the 'Murray Show'.

Just as it has been since a World Group playoff against Croatia in September 2013. Murray has since been involved in 18 of Britain's 21 winning rubbers.

It begs questions about the format, whether or not a team event can be so dominated by one player.

Should Murray opt out next year, as Federer and Wawrinka did this year, Britain's reign will be a short one. The gap behind him in Britain is a yawning one, even if Slovenian-convert Aljaz Bedene gets clearance to represent his adopted country.

Britain kick off the defence of their title as top seeds at home to Japan in March, soon after that Murray is due to become a father for the first time with wife Kim.

The indications are that he will play, but after that, with grand slams and an Olympics squeezed in, not to mention the obligatory Masters Series events, Britain could have to take their chances without their talisman.

"The timing is really what's the issue because the players, they put so much effort into the grand slams, the Davis Cup comes immediately after them, you're pretty tired at the end of the slams," Murray, who has played 104 matches this year, said after beating David Goffin.

"Most of the top players are going right through to the end of the majors. Slams are stressful, they're draining, physically and mentally. I think that's where the issue is a little bit." -Reuters