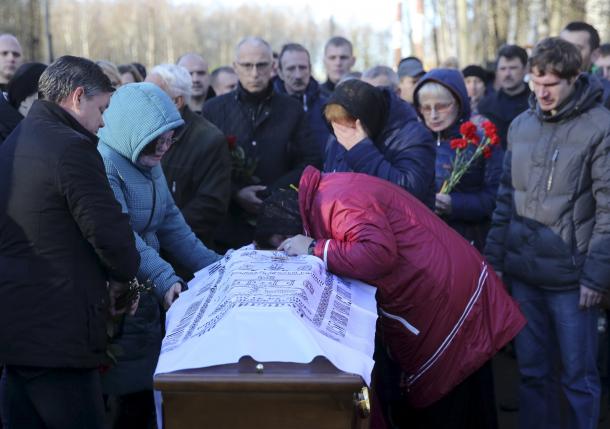 LONDON – Britain said on Thursday there was a significant possibility that Islamic State's Egyptian affiliate was behind a suspected bomb attack on a Russian airliner that killed 224 people in the Sinai Peninsula. Russia dismissed the claim as speculation and Egypt said there was no indication so far that a bomb was to blame. The topic is sensitive for Russia, whose warplanes have launched raids against Islamic State in Syria, and for Egypt, which depends heavily on revenues from tourism. Asked if he thought Islamic State was responsible, Foreign Secretary Philip Hammond said: "ISIL-Sinai have claimed responsibility for bringing down the Russian aircraft, they did that straight away after the crash. "We've looked at the whole information picture, including that claim, but of course lots of other bits of information as well, and concluded that there is a significant possibility," he said on Sky television. British Prime Minister David Cameron said it was more likely than not that a bomb was to blame. "We cannot be certain that the Russian airliner was brought down by a terrorist bomb, but it looks increasingly likely that that was the case," Cameron said. U.S. and European security sources say evidence now suggests that a bomb planted by Islamic State's Egypt affiliate - Sinai Province - was the likely cause of the crash. The sources stressed they had reached no final conclusions about the crash. Britain, Ireland and the Netherlands banned flights to and from Sharm al-Sheikh, where the doomed flight originated, while Germany urged travelers to avoid the Sinai Peninsula. Dmitry Peskov, a spokesman for President Vladimir Putin, said Russian planes were still flying to and from Sharm al‐Sheikh. "Theories about what happened and the causes of the incident can only be pronounced by the investigation," Peskov said. "So far, we have heard nothing (like this) from the investigation. Any kind of similar assumptions like this are based on information that has not been checked or are speculation." EXPLOSIVE MATERIAL Egypt's civil aviation minister, Hossam Kamal, said of the explosion theory: "The investigation team does not have yet any evidence or data confirming this hypothesis." However, the head of Russian aviation agency Rosaviatsia said investigators would examine whether there was any explosive material on the plane. Alexander Neradko said the investigation would reach initial conclusions in a few months. Russia's Kogalymavia airline, which operated the crashed plane, said three of its four remaining A321 jets had passed safety checks by Russia's state transport agency, while the fourth would be checked shortly. Russia, an ally of Syrian President Bashar al-Assad, launched air raids against opposition groups in Syria including Islamic State on Sept. 30. Islamic State has called for war against both Russia and the United States in response to their air strikes in Syria. The hardline group, which also has a presence in Egypt's neighbor Libya, is waging a campaign of suicide bombings and shootings in Egypt designed to topple the government of President Abdel Fattah al-Sisi. The Egyptian leader is currently on a state visit to Britain, which like other Western powers sees Cairo as critical to efforts to counter militancy. A senior Russian lawmaker said Britain's decision to stop flights from Sharm was motivated by London's opposition to Russia's actions in Syria, the RIA Novosti news agency reported. "There is geopolitical opposition to the actions of Russia in Syria," said Konstantin Kosachev, a senior member of Russia's upper house of parliament, when asked about Britain's decision. If a bomb killed the 224 passengers and crew aboard the Airbus A321 (AIR.PA), that would almost certainly undermine Egypt's tourism industry, which is still recovering from years of political turmoil. At Sharm airport, security appeared to have been tightened on Thursday with security forces patrolling the terminals and not allowing drivers, tour agents or others to loiter while awaiting tourist arrivals, a witness said. Islamic State, which controls swathes of Iraq and Syria and is battling the Egyptian army in the Sinai Peninsula, said again on Wednesday that it brought down the airplane, adding it would eventually tell the world how it carried out the attack. Egypt dismissed a similar claim of responsibility for the crash by Islamic State on Saturday. TOURISM WORRIES Caution among Egyptian officials in assessing the cause of the crash has not eased anxiety among tourism companies that handle visitors to Egypt's ancient sites and Red Sea resorts. Shares in Thomas Cook (TCG.L) opened down 2.1 percent after Britain canceled flights to Sharm, dealing a blow to the tourism industry on which Egypt relies to earn hard currency. Sisi has described Islamist militancy as an existential threat to the Arab world and the West, and has repeatedly called for greater international efforts to combat the militants. Britain said it was working with airlines and Egyptian authorities to put in place additional security and screening measures to allow Britons in Sharm to get home. It hoped flights bound for Britain could leave on Friday. Security experts and investigators have said the plane is unlikely to have been struck from the outside and Sinai-based militants are not believed to possess the technology to shoot down a jet cruising above 30,000 feet. Sinai Province has killed hundreds of Egyptian soldiers and police since Sisi, as army chief, toppled Islamist President Mohamed Mursi in 2013 after mass protests against his rule. Sisi was elected president last year on promises he would stabilise Egypt and rebuild its shattered economy. Critics say his tough crackdown on Islamists will only create more radicals in Egypt, which has fought militants for decades. –Reuters