CAA bans use of mobile phones at airport’s apron, lounges


KARACHI (92 News) – The Civil Aviation Authority (CAA) has imposed a ban on the use of mobile phones at airport’s apron and lounges of all national airports.

According to the notification issued by the CAA, the mobile phones will ot be allowed in the airports, aprons of all national airports.

“All addresses are hereby informed that henceforth, the use of mobile phones in the restricted areas i.e. Apron and Lounges etc is strictly prohibited,” reads a notification

“Any non-compliance of the instructions may result in the confiscation of Airport Entry Pass and the matter will be taken up with the higher authorities of the concerned department/ functionary,” the notification further reads.

The chief operating officer of the Civil Aviation Authority (CAA) has informed all managers and officials of the airport in this regard. 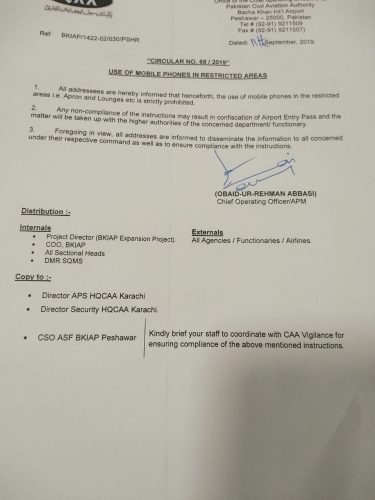 On September 5, the Civil Aviation Authority (CAA) declared a ban on eating Gutka, Naswar and Paan at the Jinnah International Airport Karachi.

“Strict action would be taken against an employee if caught eating Gutka and Naswar at premises of the airport,” said CAA in a notification.