Caddie Jackson, an iconic figure at the Masters 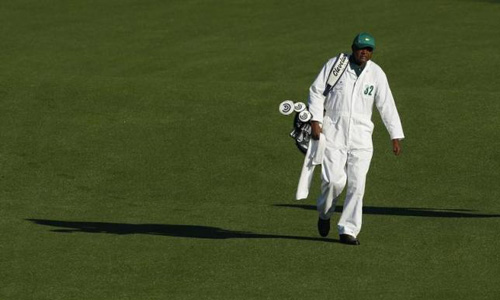 Caddie Jackson, an iconic figure at the Masters

GEORGIA - Carl Jackson has a lifetime of memories from Augusta National where he has caddied in every Masters since 1961 bar one, and is one of the remaining few in a dying breed -- black caddies who have worked at the iconic venue. For regular visitors to the Masters, Jackson has become an integral part of the tournament fabric and is best known for his remarkable 39-year partnership with fellow American Ben Crenshaw, a twice former champion at Augusta National. "In a sense, golf raised me," Jackson told Reuters alongside the fairway of the opening hole at last year's Masters. "I had to drop out of school at the age of 14 and I caused some problems at first trying to work over here but we got it all worked out. It was a nice job for me to have and I fully appreciate it, for myself and for the communities around." Jackson grew up in Sand Hill, a predominantly African-American community situated less than a mile from Augusta National. Economic circumstances forced him to abandon school and start working as a caddie. "It was a pretty dire situation for us," said Jackson. "My mother had eight kids so it was time for me to quit (school) and time to not have us worry about being evicted because there was not enough money. "I didn't want my mother having those pressures on her. I am glad that Augusta National was here. It was a good place for me to earn money." Jackson was hired in 1961 as a full-time caddie by club member Jack Stephens, who served as Augusta National's chairman from 1991-1998. Jackson worked at his first Masters that same year as bagman for Billy Burke. "Jack Stephens saw in me what my mother and granddaddy saw in me," said Jackson, who because of his relationship with Stephens first caddied for Texan Crenshaw at the 1976 Masters before the duo went on to win the tournament in 1984 and 1995. "At Augusta, Ben and I don't use numbers that much," said Jackson. "We rely a lot on instincts and eyesight. I have been twice blessed working with Ben and I would do anything in the world for him. "I am the employee and I will never stop acting like the employee but our friendship goes beyond the Masters and the golf course," said Jackson, who will caddie in his 54th Masters next week when Crenshaw will sign off in his 44th. COLON TUMORS Just weeks before the 2000 Masters, doctors discovered tumors on the wall of Jackson's colon and he missed out on that year's edition after having surgery followed by chemotherapy. It is the only Masters he has skipped since 1961. However, the days of black caddies wearing the distinctive white jumpsuits at Augusta National have been numbered since 1983 when players at the Masters were given the option of using their own bagmen. "The Masters was always a bonus week for Black Augusta," said the 67-year-old Jackson. "It (the 1983 decision) definitely hurt the caddies and their families. "After all the guys would get paid on Sunday night, they would put together a party the week after the tournament. A lot of businesses in the community benefited from the money that came in from the tournament and from the caddies who worked it." All of that is now a long way removed from comments made by Clifford Roberts, who was co-founder with Bobby Jones of Augusta National and served as its chairman from 1934-1976. "As long as I'm alive, all the golfers will be white and all the caddies will be black," said Roberts, who ended his own life by gunshot in 1977. The Masters has slowly but surely dismantled its various barriers over the years, though Jackson remains as an important link between the present and the past at golf's opening major of the season. - REUTERS