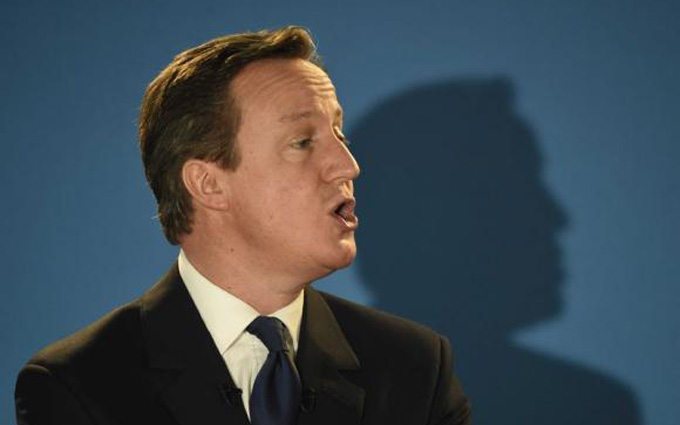 LONDON  (Reuters) - British Prime Minister David Cameron vowed on Friday to use all means at his disposal to hunt down militants such as "Jihadi John" after the killer was identified as a Kuwaiti-born computer programming graduate from London. The black-clad militant brandishing a knife and speaking with an English accent was shown in videos released by Islamic State (IS) apparently decapitating hostages including Americans, Britons and Syrians. "When there are people anywhere in the world who commit appalling and heinous crimes against British citizens, we will do everything we can with the police, with the security services, with all that we have at our disposal to find these people and put them out of action," Cameron said. Cameron refused to comment on the identification of "Jihadi John" as 26-year-old British militant Mohammed Emwazi, but said that people should get behind the security services, which he praised as impressive and dedicated to defending Britain. Emwazi was known to the security services, which had tried to recruit him, according to prisoners' group Cage. The case has sparked debate about whether the security services let him slip through their grasp to join IS in Syria. Dressed entirely in black, a balaclava covering all but his eyes and the bridge of his nose and a holster under his left arm, Jihadi John became a menacing symbol of Islamic State brutality and one of the world's most wanted men. He used videos to threaten the West, admonish its Arab allies and taunt President Barack Obama and Cameron before petrified hostages cowering in orange jump suits. Emwazi's name was first disclosed by the Washington Post. Two U.S. government sources who spoke on condition of anonymity told Reuters that investigators believed Jihadi John was Emwazi. The Sun and The Daily Mail newspapers published a picture showing a schoolboy Emwazi smiling and sitting cross-legged on the grass at the front of the photograph from the St Mary Magdalene Church of England primary school in Maida Vale, West London. A picture of him as a student was later broadcast by Sky News, showing a young man with a moustache and goatee beard, wearing a cap with a logo resembling the P from the Pittsburgh Pirates U.S. Major League Baseball team. BRITISH KILLER Born in Kuwait, Emwazi came to Britain aged 6 and graduated with a computer programming degree from the University of Westminster before coming to the attention of Britain's main domestic intelligence service, MI5, according to an account given by Asim Qureshi, research director of Cage, a group that campaigns for those detained on terrorism charges. Emwazi, a fluent Arabic speaker, said MI5 had tried to recruit him and then prevented him from travelling abroad, forcing him to leave the country without telling his family, Qureshi told a news conference in London. In a meeting with reporters, Qureshi cast Emwazi as a kind and thoughtful young man who faced harassment from MI5, which apparently suspected he wanted to join the Somali Islamist militant group al Shabaab. That account prompted criticism of MI5. But there was little patience with the narrative of Emwazi's life presented by Qureshi, who called him a "beautiful man". "Cage maintain the enemy is the security services, is the state," Professor Anthony Glees, Director of the Centre for Security and Intelligence Studies, told Reuters. "The truth could not be more different. Intelligence services are on the whole non-interventionist." Cameron's spokeswoman said it was "completely reprehensible" to seek to shift the blame from a killer to those seeking to keep British citizens safe. The daughter of David Haines, a Scottish aid worker who was beheaded by Islamic State in September, told ITV news there should be more security at airports. Bethany Haines also said she would not rest until Emwazi received a "bullet between his eyes". The family of Steven Sotloff, a U.S. journalist beheaded in August, said they had faith his killer would be brought to justice. "There's going to be no closure until these people are brought to justice," family spokesman Barak Barfi told Sky News. MI5 does not publicly comment on the identity of militants or their backgrounds while an investigation is still ongoing. "Jihadi John" fronted Islamic State videos that showed either the killing or bodies of victims including U.S. citizens James Foley, Steven Sotloff and Peter Kassig, Britons David Haines and Alan Henning, Japanese Kenji Goto and over 20 Syrian soldiers.