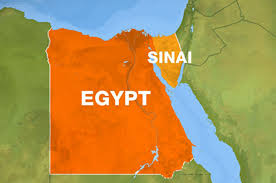 CAIRO - A car bomb exploded outside a hotel housing election judges in Egypt's North Sinai on Tuesday, killing at least three people and injuring 12, security and medical sources said. The blasts in the provincial capital of al-Arish came a day after the second round of a parliamentary election closed. Egyptian state television also reported the incident. At least one policeman was killed and two judges injured. A suicide bomber tried to drive a car bomb into the hotel before security forces opened fire on him, causing the car to explode, security sources said. There was no immediate claim of responsibility. Islamic State's Egypt affiliate, Sinai Province, has carried out similar attacks in the region as part of its bid to topple the Cairo government. State television and security sources first said a car bomb exploded then a second blast hit the area about ten minutes later. Ambulances rushed to the scene, which was sealed off by soldiers and police, said the security sources. -Reuters