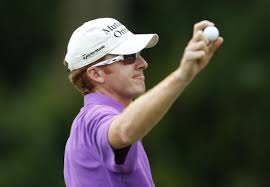 MISSISSIPPI – Roberto Castro was stung by a bee at the fifth hole but an eagle three holes later eased his pain as he vaulted to a four-shot lead on Friday at the weather-hit Sanderson Farms Championship in Mississippi. Castro holed out his second shot from 122 yards at the par-four eighth on his way to a five-under-par 67 at the soggy Country Club of Jackson, where players were allowed preferred lies. At 15-under 129, he had a four-stroke lead when play was halted in the late afternoon due to lightning, with 45 players yet to start the second round. Earlier, heavy rain and standing water caused play to be suspended for nearly five hours in the morning on a rain-soaked course that last week absorbed nine inches of rain. Among the fortunate early starters able to complete the second round was overnight leader Castro, who had fired a career best and tournament record 62 for a two-shot lead. Castro started slowly following his spree of 10 birdies on Thursday but came alive after the bee sting, sticking a perfect approach shot into the eighth green that spun back into the hole for an eagle that stretched his lead. "I think it was a yellow jacket, one of my own kind," joked Castro, who attended Georgia Tech, nicknamed the Yellow Jackets. "It just kind of got up under my shirt and it got me. It still stings. A couple of holes later I had a great wedge number, it came out perfect and just went in," he told Golf Channel. Next behind Castro in the clubhouse at 11-under was American Bryce Molder, who followed his opening 64 with a 69. Also on 11-under were Venezuelan Jhonattan Vegas, who was five-under for the day through 16 holes, and American D.J. Trahan, six-under through 16. –Reuters