KARACHI/LAHORE (92 News) – The change of guards ceremonies were held at mausoleums of Quaid-e-Azam Muhammad Ali Jinnah and Allama Muhammad Iqbal on Friday to mark the 69th Independence Day.

Commandant Naval Academy Commodore Fawad Amin was the chief guest of the change of guards ceremony at the mausoleum of Quaid-e-Azam Muhammad Ali Jinnah.

Commodore Fawad Amin laid wreath at the tomb of Quaid-e-Azam and offered prayer, while the 48 cadets and sailors of the Naval Forces’ took charge of the responsibilities as guards of the tomb.

On the other hand, chief minister Punjab Shahbaz Sharif participated in the impressive change of guards ceremony at the tomb of Allama Muhammad Iqbal.

The chief minister laid wreath at the tomb and offered fateha.

He paid tribute to the great poet Allama Iqbal. 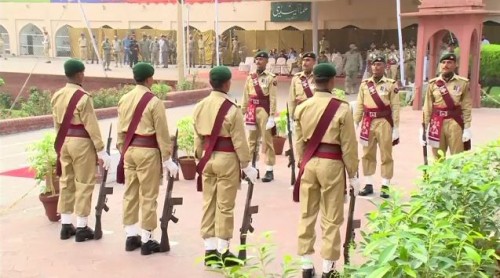