Charlie Chaplin, who spun his Tramp costume into gold, feted in archive book 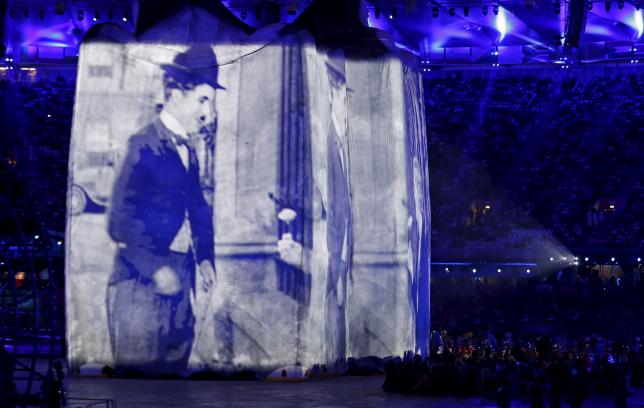 Charlie Chaplin, who spun his Tramp costume into gold, feted in archive book

LONDON - Charlie Chaplin once said that all anyone needed to make a funny film was "a park, a policeman and a pretty girl". Chaplin failed to mention the "Tramp" costume that made him world famous. You can see one of the women -- among four Chaplin married in the course of his 88 years -- in a glistening, outsized black-and-white picture of Paulette Goddard with a stolen bunch of bananas from "Modern Times" in "The Chaplin Archives", a hefty book whose author calls it a "Blu-ray" high-definition tribute to the legendary comic actor and filmmaker. Produced by the specialist German-based publisher Taschen Books, this 560-page tome weighing 7 kg (15 lb) and roughly the dimensions of a small television set, can hardly be read in bed and overwhelms many cocktail tables. But it fulfils what English author Paul Duncan says was his goal of recreating Chaplin's career chronologically -- as he lived it -- to mark, roughly, the centenary of the penniless English vaudevillian's start in the movies, when he jumped ship from a theater company touring the United States. Reproduced on page 47 is Chaplin's first movie contract, with Keystone, dated Sept. 25, 1913, for what to Chaplin was the then-princely sum of $150 a week. The rest, as anyone who has an eye for great movie-making and funny films will know, is history. His oeuvre included silent film slapstick classics like "City Lights" and "Modern Times" before he embraced sound with political satire like "The Great Dictator" and black comedy including "Monsieur Verdun". "What I wanted to do was make it an oral history, so it's actually Chaplin and his collaborators talking as you read the book, you're reading about the events of his life and how he made his films," Duncan told Reuters in an interview. With access granted to the Chaplin family archives, and help from the Cineteca di Bologna with restored films, Duncan said that although there have been countless books on Chaplin over the years, this one is different. "He's always been so private and he kept things secret and I wanted to tell that story, the story of how he made his movies," Duncan said. "Between the documents and the oral history and the things that I found that the actual people who were there when the films were made said, they're telling the story so there's never a quote from somebody who wasn't there." There is enduring interest in Chaplin, who died in 1977 and made his last film, "A Countess from Hong Kong" starring Sophia Loren and Marlon Brando, in 1967. For the British market, the specialist film company Curzon Artificial Eye is releasing a new, boxed set of 10 of Chaplin's films, plus extra features and shorts, in December. "I don't think his appeal will ever fade," Mark Towers, the product manager, said in an emailed response to questions. -Reuters