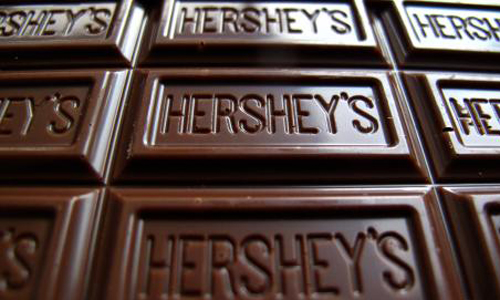 NEW YORK (Reuters) - Chocolate sales in China should grow to $4.3 billion by 2019, up nearly 60 percent from $2.7 billion in 2014 and driven by demand from the growing urban population, a senior Hershey officer forecast on Wednesday. The increase projected by Hershey International president Bert Alfonso reflects the chocolate industry's continued bet on growing emerging market consumption, despite recent indications of slowing demand in fast-growing Asian markets. Hershey (HSY.N), which has been making chocolate for more than a century, expects to benefit from this demand boom, Alonso said in a webcast heard by Reuters of the Consumer Analyst Group of New York conference. He projected the company's China sales would grow by 35 percent to $450 million in 2015. Based on that figure, chocolate sales in China made up around 4.5 percent of Hershey's $7.4 billion in total revenue in 2014. The growth comes as Hershey integrates products from its December 2013 acquisition of a majority share in Chinese candy maker Shanghai Golden Monkey Food Co. "Consumers are embracing our brands in China as we outpace category growth," Alfonso said. "We are excited about the potential for Shanghai Golden Monkey." Alfonso noted that chocolate consumption growth in emerging markets closely tracks GDP growth, and suggested China's increasing urban population would drive chocolate consumption. The bullish projections come comes as cocoa grinds in Asia, a key indicator of demand, reached their lowest level in three years in the fourth quarter of 2014. This demand drop has driven the Asian cocoa butter ratio down to 1.88-2.0 times London futures <0#LCC:>, its lowest level in 21 months. Expectations of rising chocolate demand drove major companies like Cargill CARG.UL and Olam (OLAM.SI) to expand bean processing operations in fast-growing chocolate consuming regions like Asia, prompting concerns that the market had added too much capacity. Olam has also expressed optimism about growing emerging market chocolate demand, saying late last year after its acquisition of rival Archer Daniels Midland's (ADM.N) cocoa processing business that additional grinding and pressing capacity would be necessary.