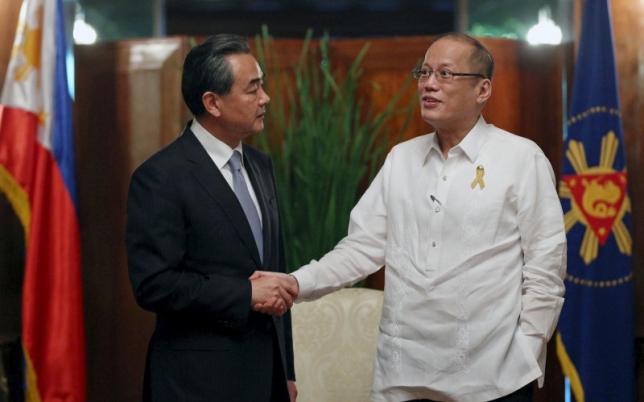 BEIJING - China's Foreign Minister Wang Yi said the Philippines' case against China at an arbitration tribunal over rival claims in the South China Sea had strained relations between Beijing and Manila, and that it was up to the Philippines to improve ties. The arbitration case against China in the Hague "is a knot that has impeded the improvement and development of Sino-Philippine relations", a statement on the Foreign Ministry's website cited Wang as saying in Manila. "We do not want this knot to become tighter and tighter, so that it even becomes a dead knot," Wang, who was in the Philippines for talks on Tuesday, told reporters in Manila. "As for how to loosen or open the knot, (we'll) have to look at the Philippines." Beijing's claim to almost the entire South China Sea is shown on Chinese maps with a nine-dash line that stretches deep into the maritime heart of Southeast Asia. Vietnam, the Philippines, Taiwan, Malaysia and Brunei also claim parts of the waterway. For years, China has insisted that disputes with rival claimants be handled bilaterally. In a legal setback for Beijing, the arbitration court in the Netherlands ruled late last month that it had jurisdiction to hear some territorial claims the Philippines had filed against China over disputed areas in the South China Sea. The Philippine government has welcomed the decision and its Foreign Affairs department said on Wednesday it would pursue the case "to its logical conclusion". "China's nine-dash line claim is expansive, excessive and has no basis under international law," said foreign affairs spokesman Charles Jose. "If left unchallenged, we could lose about 80 percent of our EEZ (exclusive economic zone)." China has boycotted the legal proceedings and rejects the court's authority in the case. Jose said on Tuesday after a meeting in Manila between Wang and his Philippine counterpart Albert del Rosario that the two countries agreed to resume foreign ministry consultations after a two-year break to explore areas where relations can move forward despite the territorial row. Manila filed the case in 2013 to seek a ruling on its right to exploit the South China Sea waters in its 200-nautical mile EEZ as allowed under the United Nations Convention on the Law of the Sea (UNCLOS). "The person who caused the problem should solve it," Wang said. "We hope that the Philippines can make a more sensible choice." -Reuters