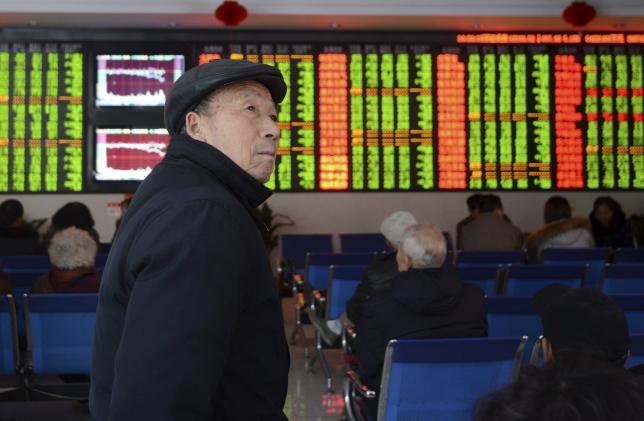 NEW YORK – Chinese shares slumped 5 percent on Friday, hit by regulatory and industrial sector worries, but the declines did not carry through to other major equity markets, which ended modestly lower. The Shanghai Composite index .SSEC and the CSI300 .CSI300 both registered their biggest one-day drops in more than three months on signs that the country's securities regulator was clamping down anew on leveraged buying. China also reported a 4.6 percent drop in profits among large industrial firms. Major Wall Street averages were little changed in an abbreviated post-Thanksgiving session, as markets closed at 1 p.m. ET. Walt Disney Co (DIS.N) led media stocks lower after the company said late on Wednesday that its ESPN subscriber base fell 3 percent. The Dow Jones industrial average .DJI fell 14.9 points, or 0.08 percent, to 17,798.49, the S&P 500 .SPX gained 1.24 points, or 0.06 percent, to 2,090.11 and the Nasdaq Composite .IXIC added 11.38 points, or 0.22 percent, to 5,127.53. Europe ended slightly weaker. Britain's FTSE 100 .FTSE and France's CAC40 .FCHI lost 0.3 percent, and Germany's DAX .GDAXI ended down 0.2 percent. The pan-regional FTSEurofirst 300 dipped 0.3 percent. The dollar set an eight-month high against a basket of currencies .DXY on speculation that both the Swiss National Bank and the European Central Bank will further cut deposit rates next week. The Swiss franc CHF= fell to its lowest against the dollar since August 2010 and dropped more than 0.5 percent against the euro on speculation the Swiss National Bank will cut its rates even deeper into negative territory if the ECB moves. China's offshore yuan, or renminbi, fell to more than a two-month low CNH=D3 of 6.4518. The onshore yuan was lower as well on concerns about growth and a lack of clarity to its expected weighting in the IMF's benchmark currency basket. "There is clearly a risk that China will try and devalue the currency further," said Ankit Gheedia, equity and derivative strategist at BNP Paribas. The slump in Shanghai stocks ended a 25-percent rebound rally since late August and contributed the lion's share of a 1.1 percent weekly drop in MSCI's broadest index of Asia-Pacific shares outside of Japan .MIAPJ0000PUS. Spot yuan CNY=CFXS was changing hands at 6.3952, 56 pips weaker than the previous close and about 0.04 percent away from People's Bank of China's midpoint rate of 6.3915. "It’s uncertain if the Chinese government is keen to show the market influence in their rate setting or whether now that they know they have gained special drawing rights inclusion they are keen to weaken their over-valued currency, knowing it will not jeopardize their case," Angus Nicholson, market analyst at IG in Melbourne, wrote in a note. –Reuters