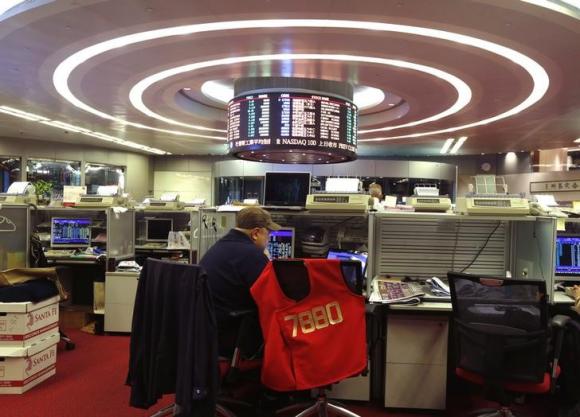 SHANGAI - China's main stock index rose to its highest in almost seven years on Tuesday morning, breaking through a key psychological resistance level to raise investors' hopes that the market has resumed a bull run begun midway through last year. The Shanghai Composite Index was on track to rise for a fifth consecutive day, hitting the highest level since June 2008, and standing firmly above 3,400 points - seen by many as a level where many investors tend to reduce holdings. Trading volume, which touched two-month highs on Monday, continued to expand, as investors regained confidence after Chinese Premier Li Keqiang vowed on Sunday to support the economy if it continues to slide and hurt employment. "There's no doubt it's a bull market," said David Dai, Shanghai-based investment director at Nanhai Fund Management Co Ltd. "The previous consolidation is only the prelude to further rises." Dai said that money is flowing to the stock market seeking higher returns after the government eased monetary policy but curbed investment in real estate and trust products. The CSI300 index rose 1.1 percent, to 3,745.19 points at the end of the morning session, while the Shanghai Composite Index gained 1.2 percent, to 3,489.46 points. Hong Kong shares also rose, with the Hang Seng index up 0.3 percent, to 24,022.97 points, and the Hong Kong China Enterprises Index rising 0.5 percent, to 11,876.50. Wu Wenzhe, fund manager at China International Management, likened China's market rally to the U.S. stock market bull run since the Fed's quantitative easing in 2009, saying Beijing's use of monetary and fiscal policies to bolster the economy is "identical to what happened in the U.S." China Railway Construction Corp Ltd jumped 5.6 percent, while China Railway Group gained 5.1 percent in Shanghai, and 3.4 percent in Hong Kong, after local media reported that state-backed companies are planning a merger deal to eliminate competition. Brokerages shares, including Huaitai Securities and GF Securities also rose, after local media reported that China is drafting rules that would help expand securities firms' wealth management businesses, potentially broadening their revenue streams. In Hong Kong, shares of China Rongsheng Heavy Industries Group Holdings Ltd opened up 9.3 pct on news of the company's restructuring plans, but the stock surrendered gains and moved into negative territories by midday, down 1.3 percent. - Reuters