ISLAMABAD (92 News) – Minister for Planning and Development Khusru Bakhtiar on Sunday informed that China will provide $1 billion for socio economic development to Pakistan.

Speaking to the NA session, the Pakistan Tehreek-e-Insaf government came into power, it had inherited massive fiscal and current account deficits, the latter of which it had brought down to $12 billion from $20bn.

He said that the PML-N controlled the value of Pakistani rupees in artificially in the previous tenure, adding that the previous government did not take benefit of $32 billion due to the reduction of oil prices.

He pointed out that the PML-N had a total fiscal space of $66bn during its tenure and could have put the country’s economy back on track, but the Dar economy failed, and a precious five years were wasted.

“Ishaq Dar can be truly called an ‘economic hitman’ due to his policies,” he stated, adding that the parliament, being the most important policy making institution, should draft a charter of economy.

The minister urged government and opposition lawmakers to sign a charter of economy in order to prevent Pakistan’s return to the International Monetary Fund (IMF) for bailout packages in the future.

Khusro Bakhtiar sought joint action from parliamentarians to save the economy, reminding lawmakers that when 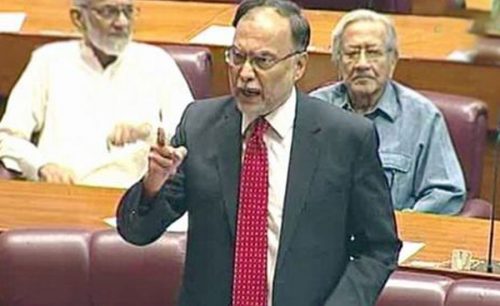 Responding to Khusro Bakhtiar, PML-N leader Ahsan Iqbal had held the floor and criticised the budget saying that the government seeks the passing of the budget with the sole purpose of getting the $6bn dollar IMF package, come what may.

“This government is a year old and will have to be answerable for its performance. It should not keep on pointing fingers at past governments,” Iqbal asserted.