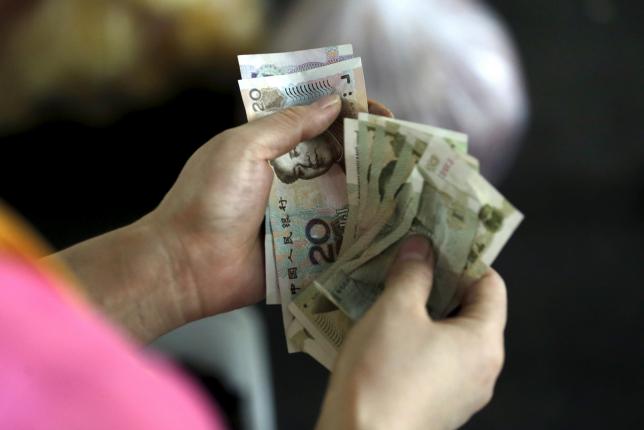 HONG KONG - China's yuan fell against the dollar on Tuesday despite a slightly stronger midpoint set by the central bank as traders expect the currency to be under further downward pressure amid a struggling economy. The People's Bank of China set the midpoint rate CNY=SAEC at 6.3966 per dollar prior to market open, firmer than the previous fix of 6.3969. The spot market CNY=CFXS opened at 6.3923 per dollar and was changing hands at 6.4005 near midday, 58 pips away from the previous close and 0.06 percent away from the midpoint. The spot rate is currently allowed to trade with a range 2 percent above or below the official fixing on any given day. The yuan posted its biggest weekly loss on record and touched four-year lows after the central bank's surprise devaluation of its currency by nearly 2 percent last Tuesday. "We consider the fair value of the yuan based on a trade-weighted basket at around 6.4-6.5 against the dollar and expect the direction of the currency unit fluctuation to be based on the health of the economy and the movement of other currencies globally," Credit Suisse analysts said in a note on Monday. Chinese home prices rose in July for a third consecutive month, fuelled by improved sales and market sentiment, suggesting the property market is slowly recovering in a rare counterpoint to a growing list of grim economic indicators. "Trading volume is less than 7 billion yuan today, which is extremely low compared to nearly 70 billion during the devaluation last week," said a trader at an Australian bank in Shanghai. The offshore yuan was trading 0.60 percent weaker than the onshore spot at 6.4389 per dollar. Offshore one-year non-deliverable forwards contracts (NDFs)CNY1YNDFOR=, considered the best available proxy for forward-looking market expectations of the yuan's value, traded at 6.565, or 2.57 percent away from the midpoint. One-year NDFs are settled against the midpoint, not the spot rate, and now that the trading band has been widened to 2 percent in either direction, corporates are much warier of using the NDF to hedge given the basis risk inherent in them. As a result the market has lost liquidity in recent years and has frequently proven an unreliable measure of market sentiment. -Reuters