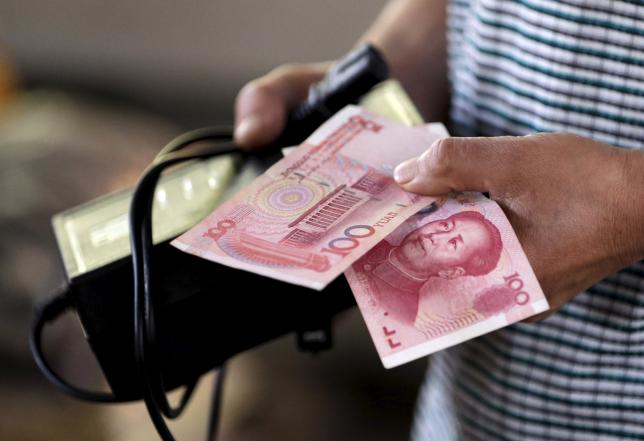 HONG KONG - China's yuan held steady against the dollar on Monday on a firmer official midpoint fix, pointing to continued efforts by the central bank to calm frayed nerves after last week's surprise devaluation sliced 3 percent off the currency's value. The People's Bank of China set the midpoint rate CNY=SAEC at 6.3969 per dollar prior to market open, firmer than the previous fix 6.3975. The spot market CNY=CFXS opened at 6.3941 per dollar and was changing hands at 6.3943 at midday, 25 pips away from the previous close and 0.04 percent away from the midpoint. It traded within a tight range between 6.3915 and 6.3967. The spot rate is currently allowed to trade with a range 2 percent above or below the official fixing on any given day. Traders say the stabilization of the yuan was mainly market-driven, and they have not seen any signs that major state-owned banks are intervening in spot rates during the session as happened last week. "I think the yuan will hover around 6.40, up or down by no more than 150 pips, 300 pips at most," said a trader at a Chinese commercial bank in Shanghai. The yuan posted its biggest weekly loss on record and touched four-year lows after the central bank's surprise devaluation of its currency by nearly 2 percent last Tuesday. The move rattled world financial markets on speculation that Beijing would continue to guide the yuan lower, stoking fears the devaluation would spark a global currency war. In an effort to calm volatile markets, the PBOC said late last week it sees no reason for the yuan to fall further. Traders say the currency is likely to remain under downward pressure as the economy struggles, but do not believe Beijing will engineer a big devaluation or a series of devaluations to boost exports. "In the near term, the RMB could continue to be under pressure given weak fundamentals as well as the strength of the U.S. dollar, but the PBoC could intervene if needed," said Larry Hu, an analyst at Macquarie. China's move to weaken the yuan last week could head off further similar "adjustments", and the yuan is likely to move in both directions as the economy stabilizes, Ma Jun, chief economist at the central bank said on Sunday. The offshore yuan was trading 0.62 percent away from the onshore spot at 6.4339 per dollar. Offshore one-year non-deliverable forwards contracts (NDFs)CNY1YNDFOR=, considered the best available proxy for forward-looking market expectations of the yuan's value, traded at 6.5475, or 2.30 percent away from the midpoint. One-year NDFs are settled against the midpoint, not the spot rate, and now that the trading band has been widened to 2 percent in either direction, corporates are much warier of using the NDF to hedge given the basis risk inherent in them. This has resulted in a loss of market liquidity in recent years and has frequently proven an unreliable measure of market sentiment. -Reuters