RAWALPINDI (92 News) – The soldiers of Chinese and Turkish armies will participate in the Pakistan Day parade to be held on March 23 for the first time.

Pakistan Day Parade will be held on March 23.

In a statement issued by the Director General Inter-Services Public Relations (ISPR), Chinese soldiers will take part in the parade being held on March 23, to mark the Pakistan Day celebrations.

The DG ISPR said that a Turkish military band will also participate in the parade.

Meanwhile, preparations are in full swing to hold the parade in befitting manner. 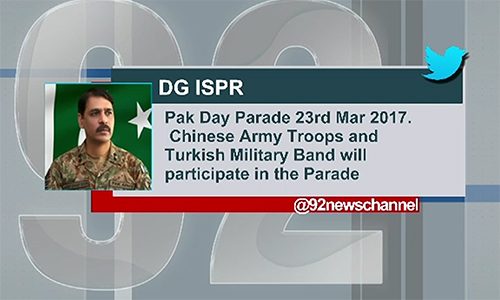